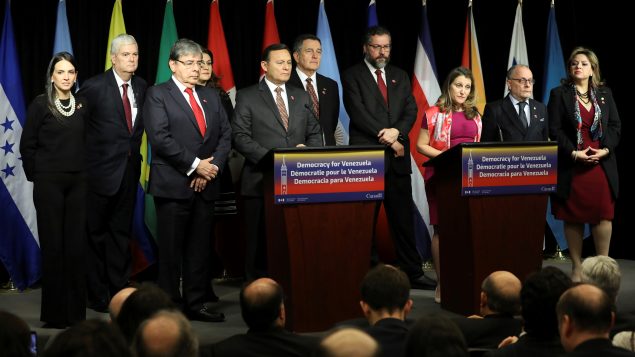 Foreign ministers of nearly a dozen countries of the Lima Group that had gathered in Ottawa Monday to discuss the political crisis in Venezuela called on the country’s military to recognize as their new commander-in-chief interim President Juan Guaido.

Since then a growing number of countries, including Canada, have recognized Guaido as Venezuela’s only legitimate leader, calling on Maduro, who won a highly controversial vote in May 2018, to step down and clear the way for new elections.

The 17-point declaration adopted by the Lima Group countries that had gathered in Ottawa Monday – Argentina, Brazil, Canada, Chile, Colombia, Costa Rica, Guatemala, Guyana, Honduras, Panama, Paraguay, Peru and Saint Lucia – also reiterated their “support for a process of peaceful transition through political and diplomatic means without the use of force.” 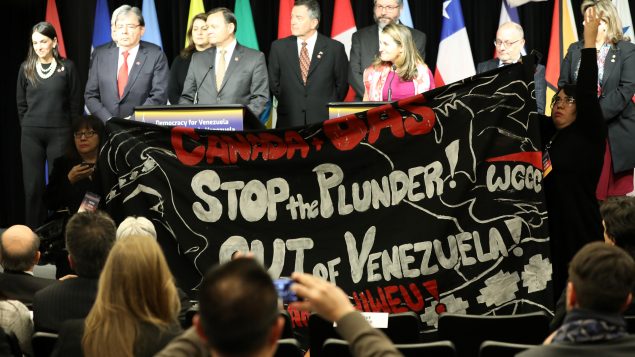 Canada’s Foreign Affairs Minister Chrystia Freeland denied suggestions that the Ottawa declaration is a diplomatic window dressing for a military coup in Venezuela.

“Nothing could be further from the truth,” said Freeland whose address was briefly interrupted by protesters who unfurled a banner and threw leaflets saying, “Hands off Venezuela.”

“In terms of the democratic legitimacy of Juan Guaido as interim president of Venezuela, it’s very important to understand that he derives his legitimacy from the National Assembly, which is the sole remaining legitimately, democratically constituted body in Venezuela,” Freeland said.

Guaido recognition as interim president gives him interim authority to be explicitly used to organize free and fair elections in Venezuela, Freeland said.

The declaration adopted by the Lima Group specifically called for “the immediate re-establishment of democracy in Venezuela through the holding of free and fair elections called by the legitimate authorities, according to international standards as soon as possible.”

“This is about allowing the people of Venezuela to follow their own constitution, supporting them in their efforts to do that, supporting the sole remaining legitimate democratically elected body that is left in Venezuela, which is the National Assembly,” Freeland said.

“And that is why so many countries around the world, our likeminded democracies in the Americas and now in Europe have joined Canada and Lima Group in recognizing Juan Guaido as interim president of Venezuela.”

Controversy over denial of accreditation

And while the Ottawa declaration also urges “the restoration of full freedom of the press, the end of censorship and the normalization of the functions of the media whose operations has been arbitrarily impeded by the Maduro regime,” Russian authorities accused Canada of hypocrisy.

Russian state-owned news agency Sputnik and Venezuela’s Telesur, which is seen as staunchly pro-Maduro, reported Monday that their correspondents were denied accreditation by Canadian officials.

Officials at the Russian embassy in Ottawa said a decision by Global Affairs Canada to deny accreditation for the Russian media to cover the Lima Group meeting was “highly reprehensible and shameful.”

“Deliberately targeting news agencies Sputnik and RIA, as well as TASS correspondent duly registered at the Press Gallery, runs contrary to Canada’s adherence to the freedom of speech and is nothing more than politically motivated harassment of reporters,” said a statement by the Russian embassy in Ottawa.

“Canada should stop restricting journalists from reporting freely without obstruction or reprisal and must apply to itself the same rules and standards it demands from others to follow.”

Philippe-Vincent Foisy, president of the Press Gallery, said they will be seeking explanations from Global Affairs Canada to “safeguard the access expected for gallery members.”

If ITAR-TASS was indeed denied accreditation from the Lima Group meeting, that is “problematic,” Foisy said.

“The Press Gallery believes in the freedom of the press,” Foisy said in an emailed statement. “I would note that Canada could set an example for all by embracing access to reporters even from state press agencies or others they don’t necessarily agree with, as long as there are no security concerns.”

Officials at Global Affairs could not be reached for comment.

Radio Canada International also reached out to the Canadian Association of Journalists and the Canadian Journalists for Free Expression but did not hear back from them in time for publication.