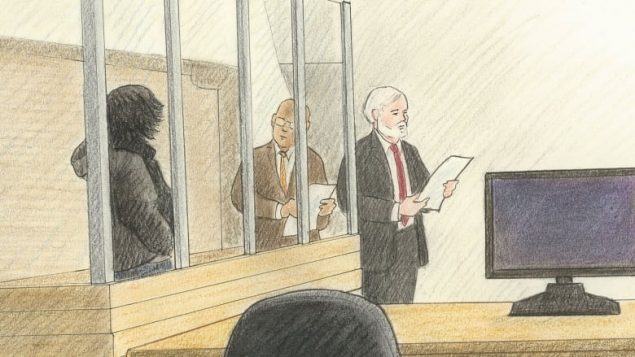 A minor, who can’t be identified under the Youth Criminal Justice Act, appeared in a Kingston courtroom on Jan 25 to face two charges related to an anti-terrorism investigation. On Monday the 16 year-old made a brief court appearance via video at for a bail hearing that was postponed until Feb. 12. (Laurie Foster-MacLeod sketch- via CBC)

A youth facing terrorism-related charges in Kingston, Ontario made a brief appearance in court on Monday only to see his bail hearing put off until nextTuesday.

The 16-year-old, whose name cannot be released because of his age, faces charges of knowingly facilitating a terrorist activity and counselling a person to use an explosive or other lethal device in a public place with the intent to cause death or serious bodily harm.

The RCMP arrested the youth January 24 following a tip from the U.S. Federal Bureau of Investigation.

Another man was arrested at the same time and later released without charges.

Police, who began investigating in December, say no actual device was ever planted in the alleged plot and no time or specific place was ever chosen but that an “attack plan” needed to be disrupted. 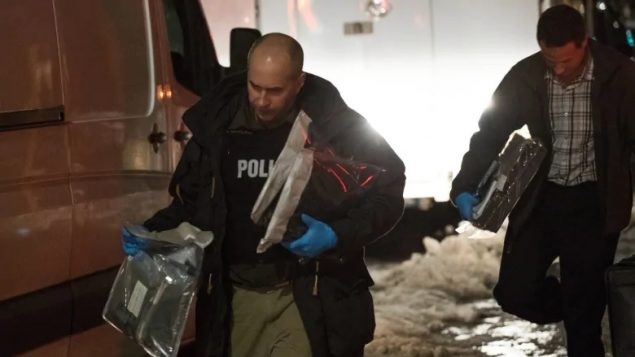 Police officers carry evidence after raiding a house in Kingston, Ontario, on Jan. 24. A youth faces terrorism charges in connection with the case. (Lars Hagberg/Canadian Press)

Police found what they say were “precursor elements” for a bomb.

Following the arrests, those elements were removed and blown up.

Because the second man arrested and later released came to Canada as a Syrian refugee, the case may have wide repercussions ahead of this fall’s federal election.

Conservative leader Andrew Scheer sounded an alarm about Canada’s screening process and some other Tories have followed suit.

The Liberal government of Prime Minister Justin Trudeau has dismissed the Tories’ concerns saying any gaps in the screening process have been addressed.