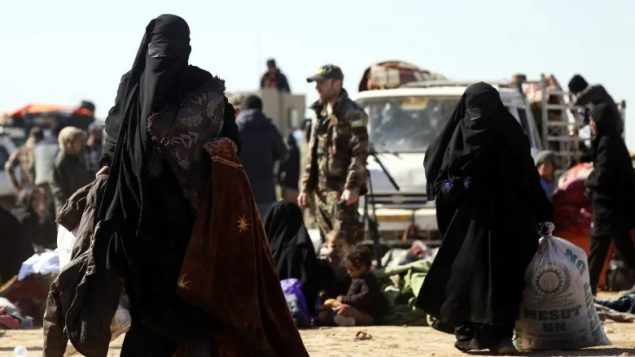 Conflict between between Syrian Democratic Forces (SDF) and ISIS militants has prompted civilizans to flee Baghouz. They include two Canadian women (not pictured) in the front-line Syrian village surrendered to U.S.-backed forces. (Delil Souleiman/AFP/Getty Images)

Global Affairs Canada says it is aware of two Canadian women being detained in Syria.

The confirmation follows CNN interviews with the two Canadians after they fled one of ISIS’s last remaining strongholds in eastern Syria and surrendered to U.S.-backed troops last week near the village of Baghouz.

The women, both of whom spoke fluent English, said they were from Toronto and Alberta and had gone to Syria at the instance of their husbands.

One of the two women interviewed by CNN identified herself as 28-year-old Dura Ahmed of Toronto.

The other woman, who said she did not wish to be idenfified, said was 34 and a graphic designer from Alberta.

Both said they had gone to the region with their children at the insistence of their husbands. 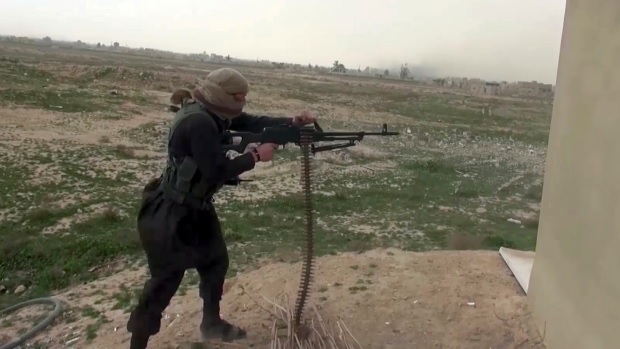 This frame grab from video posted online Friday, Jan. 18 by supporters of the Islamic State group, purports to show an ISIS fighter firing a weapon during clashes with members of the U.S.-backed Syrian Democratic Forces, in the eastern Syrian province of Deir el-Zour, Syria. (Militant Photo via AP)

“Canadian diplomats have established a communication channel with local Kurdish authorities in order to verify the whereabouts of Canadian citizens,” Walker said.

“Reports of an agreement concerning the repatriation of Canadian citizens from Syria are false,” Walker added.

According to Institute for Strategic Dialogue, there are at least four men, five women and 11 Canadian children still in Kurdish custody in Syria.

News of the womens’ surrender follows a statement last week by Public Safety Minister Ralph Goodale, saying would not heed a call by the Washington to repatriate Canadians in the region because of the risks involved.

Leaving Canada to participate in a terror group is an offence under Canada’s Criminal Code, punishable by up to 10 years in prison.

With files from CBC, CTV, CNN