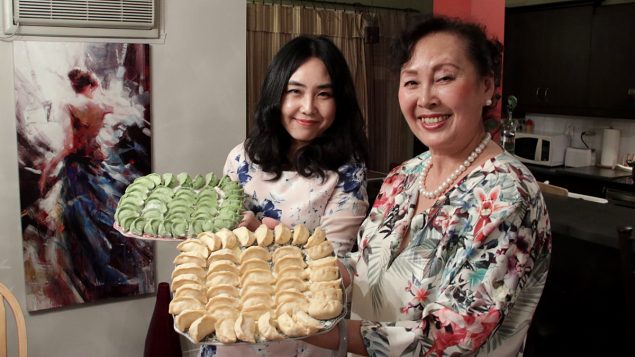 Xia Liu and her daughter Isabelle made two kinds of dumplings for the Chinese New Year. Photo: RCI/Marie-Claude Simard.

Xia Liu, who just became a pemanent resident in Canada, remembers fondly the New Year’s  Eves of her childhood, in Tianjin, in northern China, when all the relatives were gathered to make and eat dumplings together.

Now, Xia Liu lives with her daughter in La Prairie, just south of Montreal, and together they make the traditional dumplings for the Chinese New Year which fell on February 5th this year.

A few days before, they welcomed Radio Canada International into their home and we made delicious dumplings together. A few friends joined us. We laughed and ate a lot. It was like an early celebration of the the New Year. What a feast! 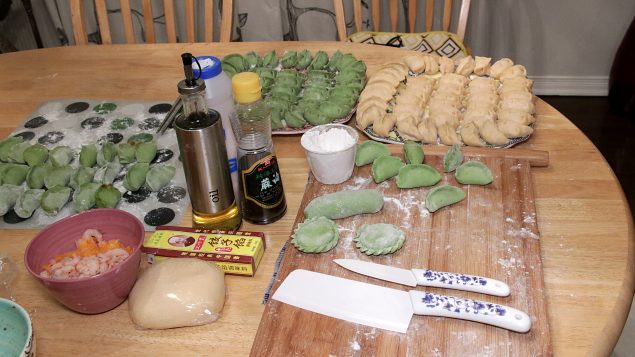 Xia Liu showed us how to make dumplings of different colors and shapes. Photo: RCI/Marie-Claude Simard

“In her days New Year’s celebrations were much simpler than now. People didn’t ask for much, it was all about the family being together and eating dumplings,” explains Isabella, translating her mother’s words in Mandarin into English.

“Even in less well-off families, everybody wears new clothes on New Year’s Eve”, she says.

“Kids are so happy! Everything is new and they can have good food as well.” – Isabelle Cai

Dumplings, or “shui jiao” in Mandarin, are little half-moon shaped raviolis that can be filled with a wide variety of stuffings, either made with meat or vegetables, or both. They’re usually boiled. 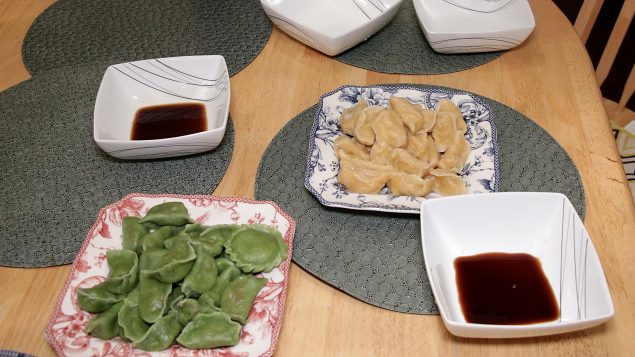 Liu – who likes to be called Louisa in English – learned how to make them from her parents when he was a child. Over the years, she developed her own variations of the traditional recipe. This week, for celebration the Year of the Pig, she made dumplings that were bright green, and others that were yellow, instead of the traditional white ones.

TWO DELICIOUS STUFFINGS
The green dumplings were stuffed with a mixture of ground beef and vegetables. The yellow ones with shrimps and pumpkin. Here are the recipes. Quantities are approximations, you’ll have to experiment! 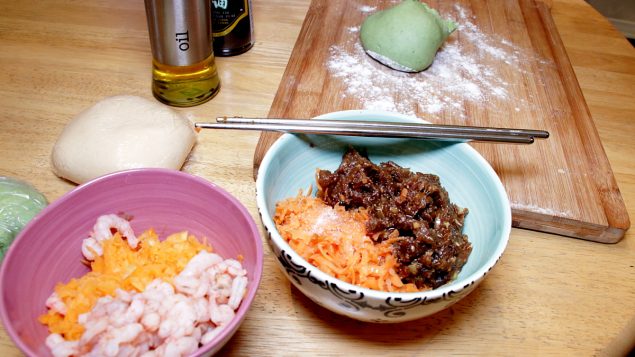 PREPARATION:
In the preparation of either stuffing, you’ll need:
1/3 cup vegetable oil
1 tbsp sesame oil
Salt
1 tsp of 13-spices
Mix all the ingredients together. Since the meat or shrimps aren’t cook, you can’t use your sense of taste to adjust de quantities. Use your instinct and sense of smell! 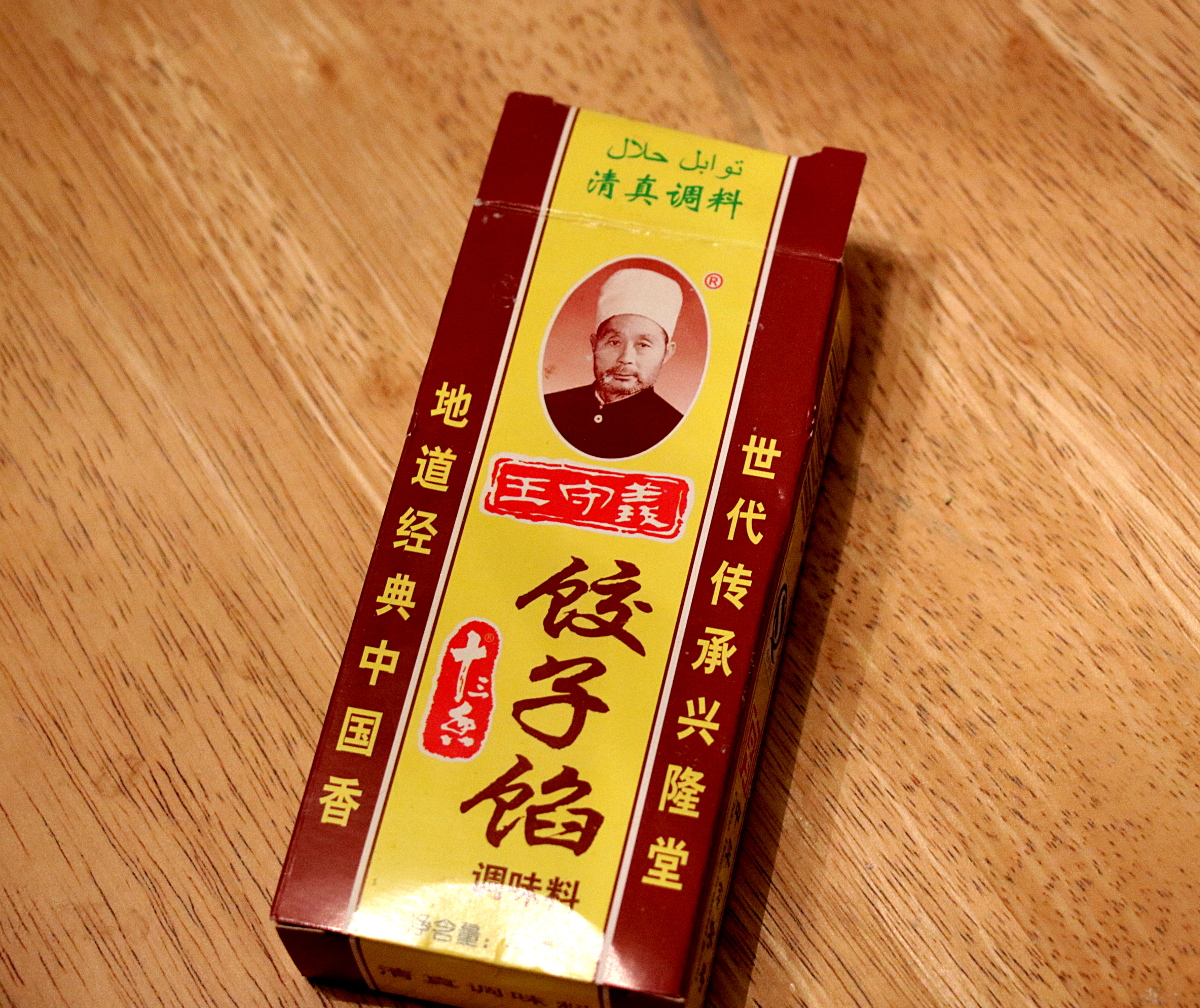 How about the dough?

To save time, Louisa made the dough ahead of time, before we arrived. She says the basic recipe is simply a mixture of flour and water. In her recipe, she replaced the water with spinach juice, for the green dumplings, and pumpkin juice, for the yellow ones.

It is also possible to buy dumpling dough in most Chinese groceries. That would be a good option for beginners! 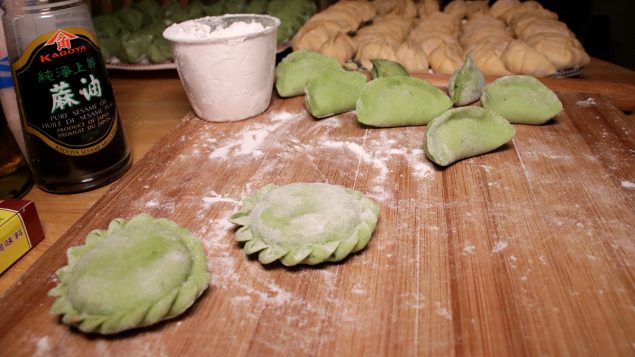 How to shape the dumplings?

To shape the dumplings you’ll need a small rolling pin… and a lot of patience!

The most common shape is the half-moon shape. “It symbolizes an ancient piece of money. It will bring you wealth to eat those dumplings. You’re going to be rich.”

Liu also made round dumplings.

“The round shape in China is very good. It means the whole family is getting together,” says isabelle.

You want to learn how to shape the dumplings? Watch our video!

Finally, once the dumplings are shaped, gently drop them into a big pot of boiling water. Not more than twenty at a time, so they don’t stick together. Once they float on the surface of the water, they’re ready to eat. They are very good with black rice vinegar. Bon Appetit! 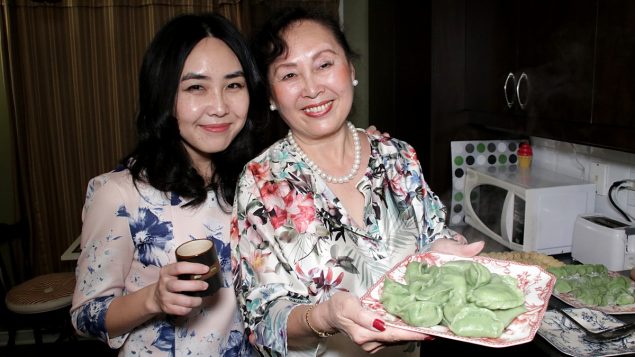 Isabelle has been in Canada for 15 years. Her mom arrived in Canada in the middle of January and is going to live with her from now on. Mother and daughter celebrated the New Year together at a friend’s house this year. Photo: RCI/Marie-Claude Simard

More stories about people and food (in French)