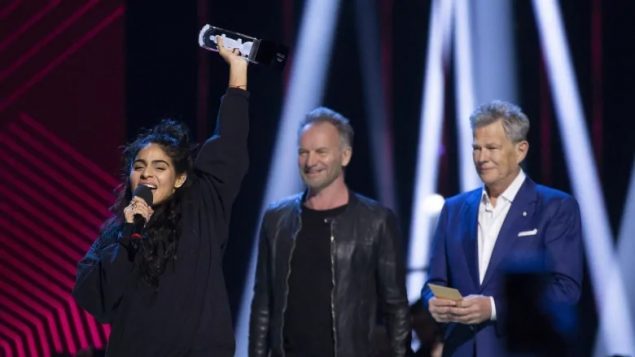 Jessie Reyez triumphantly raises her Juno for R&B/soul recording of the year, as presented to her by Sting and David Foster. (CARAS/iPhoto)

This weekend marked the culmination of the year 2018 in Canadian music. The Juno awards or “Junos” are the biggest musical awards event in the country celebrating the best in Canadian music each year.

This year the event was held in London, Ontario, and by all accounts was a huge success.

It featured a guest appearance by star Corey Hart who performed a couple of his hit songs from the past to an enthusiastic reception and who was inducted into the Canadian Music Hall of Fame.

Another big moment was the surprise appearance of Sting who is performing with his musical in Toronto, who introduced David Foster to receive an award.

Other winners included the Arkells, named Group of the Year. bülow was named Breakthrough Artist of the Year, while Avril Lavigne took home the Juno Fan Choice Award. Jessie Reyez won R&B/Soul Recording of the Year, Robi Botos won Jazz album (solo), Instrumental of the year went to Gordon Grdina, while the award for Country Album of the Year went to Brett Kissel.