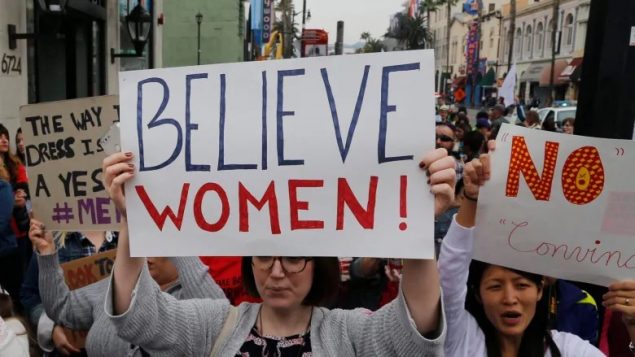 Participants march against sexual assault and harassment at the #MeToo March in the Hollywood section of Los Angeles in November 2017. Manitoba announced Tuesday it was launching a government-wide campaign to combat sexual harassment in the civil service. (Damian Dovarganes/Associated Press)

Manitoba has launched a government-wide campaign to combat sexual harassment.

It includes posters that clearly define what constitutes sexual harassment and messages that discourage people from making jokes or sending emails about gender.

“What might have been dismissed as a colourful or off-putting joke a decade ago…is sexual harassment,” Rochelle Squires, the minister responsible for the status of women, told the media Tuesday.

Squires said the government is also strengthening the guidelines for dealing with harassment. 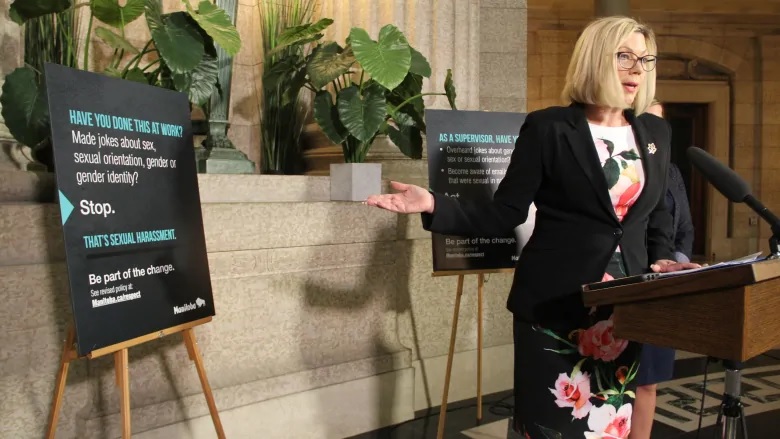 Rochelle Squires, Manitoba’s minister responsible for the status of women, speaks at a news conference Tuesday at the Manitoba Legislature about the province’s new sexual harassment awareness campaign. (Ian Froese/CBC)

The campaign follows a study released last August that found that hundreds of civil servants had experienced sexual harassment but that most did not report it for fear of reprisals or hurting their careers.

The report found that 24 per cent for those who reported harassment said that nothing was done while 13 per cent said they were satisfied with the resolution.

The most frequent harassment included leering or invading space.

Other victims reported inappropriate physical contact such as touching, patting or pinching.

Last year, a Tory backbencher, Cliff Graydon, was kicked out of caucus after allegations he asked two female staff to sit on his lap and suggested another lick food off his face. 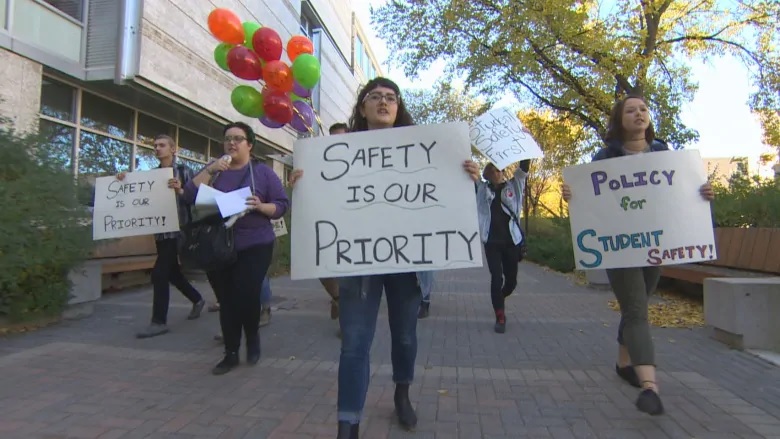 A group of University of Manitoba students protest in October 2017 to demand changes to the school’s sexual harassment policy after allegations surfaced against a former music professor at the school. (CBC)

Another woman alleged a member of the legislature groped her at party function.

And a former NDP cabinet minister, Stan Struthers who came to be known to some as “Minister Tickles” apologized after five women told CBC News they were subject to unwanted touching or tickling from him.

In December, a Statistics Canada study found that 19 per cent of Canadian women and 13 per cent of men reported being harassed in the workplace, with the highest level of harassment in health-care jobs.

And a survey released in December 2017 found that nearly one in four employers in Manitoba had had issues with sexual harassment arise in the workplace.