‘By Chance Alone’ reminds us of what happens when society sees and experiences signs of hate, but chooses to look away, said the book’s defender, Ziya Tong.

A book in which a survivor describes his journey from a Nazi concentration camp to Canada has won a contest run by the public broadcaster, CBC. Called Canada Reads, the contest runs for five days during which five prominent people present and argue in favour of the books they have chosen. One book is eliminated each day. The theme this year was “One Book To Move You.”

In it, he tells the story of his family’s deportation to the Auschwitz concentration camp during World War II. 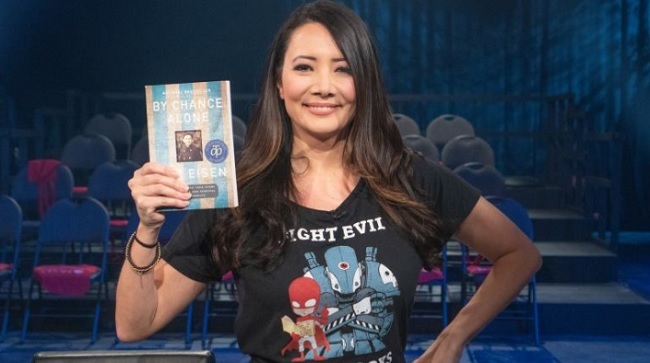 Ziya Tong won for her passionate defence of the Holocaust memoir, By Chance Alone. (CBC)

‘Society must never forget the past,” argued Tong

Tong argued that By Chance Alone was the most powerful book for illustrating that society must never forget the past in order to not repeat it.

She told The Canadian Press that this was now “more pressing given the reappearance of swastikas in the news and on social media.” She called the memoir “a powerful reminder of what happens when society sees and experiences signs of hate, but chooses to look away.”

Other books in the Canada Reads running were:

-Homes by Abu Bakr al Rabeeah with Winnie Yeoung, the memoir of a teen who fled a Middle East war zone to Canada.

–The Woo-Woo by Lindsay Wong.

Canada Reads is a yearly event broadcast on CBC Radio and television.