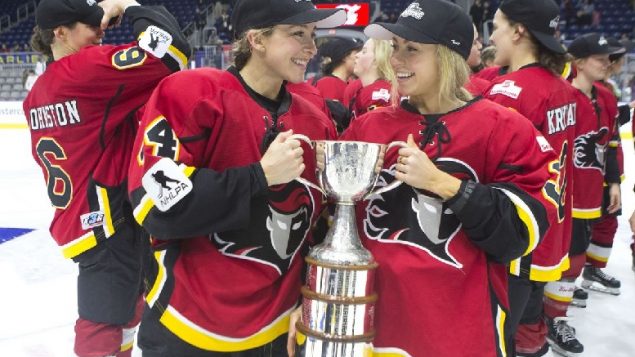 Calgary Inferno's Zoe Hickel (left) and Tori Hickel celebrate with the trophy after beating Les Canadiennes de Montreal 5-2 to win the 2019 Clarkson Cup on March 24. A week later the league announced it was shutting down. (Chris Young-THE CANADIAN PRESS

It began in 2007 to promote hockey as a professional sport option for women, but now the Canadian Women’s Hockey League (CWHL) Board of Directors has announced that the league cannot continue and will cease operations on May 1.

A statement released by the league said, “Unfortunately, while the on-ice hockey is exceptional, the business model has proven to be economically unsustainable”.

The statement went on to note that even though there was record TV viewership for the championship Clarkson Cup (175,000 fans) the league cannot continue as is.

The league had five Canadian teams, one U.S team and one team in China.

Various players  expressed shock and disappointment at the sudden announcement.

The league which owned the teams said even if a last minute backer came through it is highly unlikely the league could continue next year.

Former Canadian Governor-General Adrienne Clarkson who donated the championship trophy that bears her name says she would be in touch with her contacts to see if something can be salvaged.