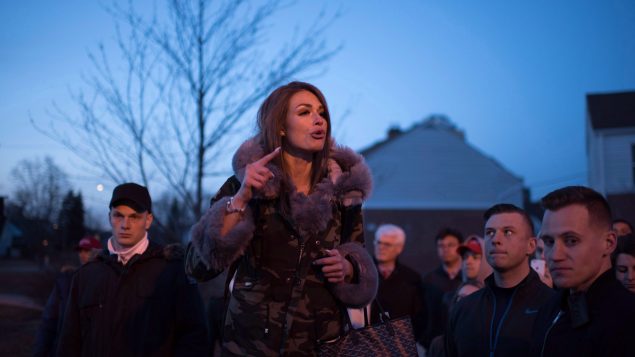 Faith Goldy who was supposed to speak at Wilfrid Laurier University but was interrupted by a fire alarm speaks outside the university on March 20, 2018. Six Canadian individuals and groups involved in "organized hate" have been banned from having any further presence on Facebook and Instagram. Those banned include one-time Toronto mayoral candidate Faith Goldy. (Hannah Yoon/THE CANADIAN PRESS)

The company said it will also remove “affiliate representation for these entities, including linked pages and groups.”

“Individuals and organizations who spread hate, attack, or call for the exclusion of others on the basis of who they are have no place our services,” reads a statement from Facebook. “That’s why we have a policy on dangerous individuals and organizations, which states that we do not allow those who are engaged in offline ‘organized hate’ to have a presence on our services.”

“This is TOTALITARIANISM against someone who has committed NO CRIME!” she tweeted to more than 120,000 followers. 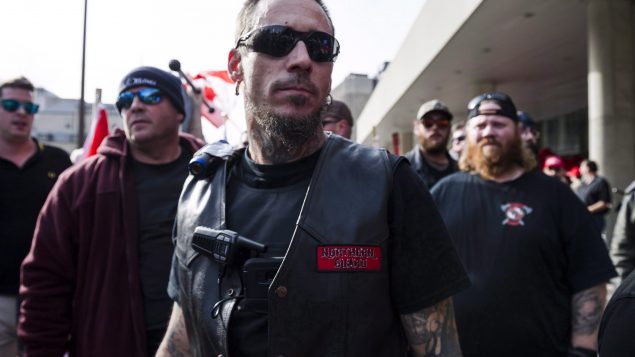 Far-right and ultra-nationalist groups, including the Northern Guard, Proud Boys, and individuals wearing Soldiers of Odin patches, were among those gathered to protest the government’s lawsuit settlement with former Canadian Guantanamo detainee Omar Khadr, at Nathan Philips Square in Toronto on Saturday, Oct. 21, 2017. Soldiers of Odin was one of six groups banned from Facebook and Instagram on Apr. 8, 2019. (Christopher Katsarov/THE CANADIAN PRESS)

Facebook follows an extensive process in determining which organizations are designated as hate groups, and have worked with a number of different academics and organizations around the world to refine this process, company officials said.

Among the parameters considered by Facebook are signals such as whether organizations and their leaders have called for or directly carried out violence against people based on race, religious affiliation, nationality, ethnicity, gender, sex, sexual orientation, serious disease or disability, the company said.

Minister of Democratic Institutions Karina Gould said racist and violent views should not be tolerated on social media platforms.

“There is no place in Canada for these kinds of divisive societal statements,” she said. “We are pleased that Facebook has made this decision and would hope that other platforms would look to Facebook’s actions.”