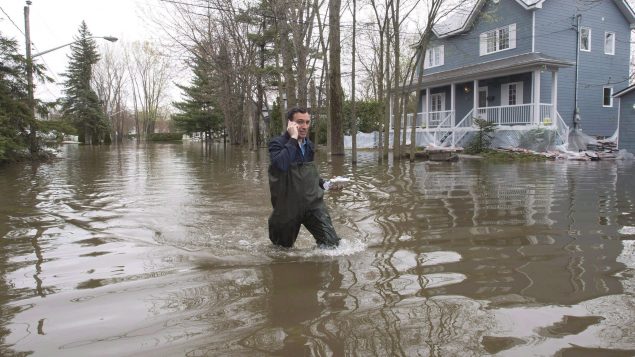 A man makes his way through the flooded streets in Laval, Que., on Wednesday, May 10, 2017. (Ryan Remiorz/THE CANADIAN PRESS)

Provincial and municipal authorities in Quebec are warning residents of several low-lying areas to brace for severe flooding as parts of Canada’s French-speaking province are about to experience the double whammy effect of rapid snowmelt and heavy rains.

Environment Canada says 25 to 50 millimetres of rain is expected to fall in southern and western Quebec over Thursday and Friday, and more rain is forecast in coming days.

The town of Rigaud, near the Quebec-Ontario border, has told its residents to evacuate the low-lying areas near the Ottawa River, west of Montreal, which are still recovering from the flooding in 2017.

Residents of neighbouring municipality of Pointe-Fortune are also being advised to take flood precautions.

And further east, residents of western Montreal and Laval along the banks of Milles-Îles and Des Prairies rivers, and Lake St-Louis are being told to prepare for flooding. Authorities in Laval expect more than 1,500 residences to be affected by the flooding.

The provincial electricity utility company, Hydro-Quebec, said Wednesday that many rivers, including the Outaouais, Gatineau, Mille-Îles and Saint-Maurice rivers “may experience drastic increases in water levels.”