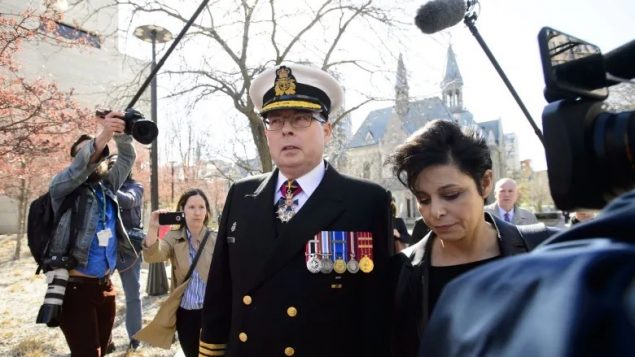 Vice-Admiral Mark Norman arrives at the Ottawa courthouse with lawyer Marie Henein on Wednesday, May 8, 2019. The Crown prosecutors subsequently withdrew their charge against the naval officer. (Sean Kilpatrick/The Canadian Press)

After the scandal involving the Trudeau government’s handling of the SNC-Lavalin affair, comes new allegations of government interference in the case of one of Canada’s highest ranking military officers.

In January 2017, Vice-Admiral Mark Norman was removed from his position without explanation.

It was later revealed that he would be charged with “breach of trust” allegedly over leaking documents related to the construction of a naval re-supply vessel.

The Public Prosecutor announced last week that the charge was being dropped in the case which would have run during this autumn’s general election campaign.

Now Conservative and New Democratic Party members of Parliament have written to the national defence committee asking for an emergency meeting into the Liberal government’s conduct in the affair.

Their letter alleged Liberal government influence in the case against Norman, interference in the shipbuilding contract, and then smeared the officer’s reputation when that information became public.

The opposition Members of Parliament have also submitted a list of witnesses they want to hear from which includes Prime Minister Trudeau, his former principle secretary Gerald Butts, the Chief of Defence Staff Harjit Sajjan, several high ranking public servants, and outgoing Liberal Member of Parliament Andrew Leslie who had indicated to the Prime Minister that he would testify on behalf of Vice Admiral Norman,

The opposition MP’s have indicated they would like witnesses to appear this month, and that meetings be televised.