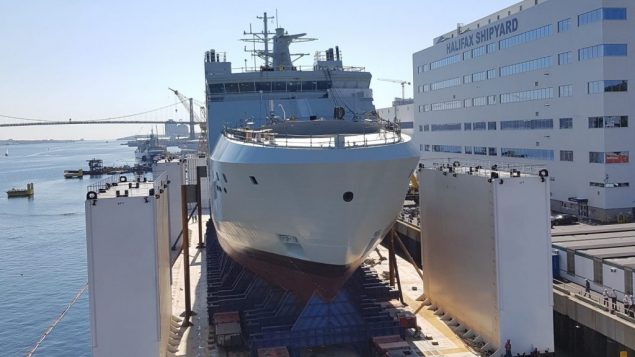 In an effort build deeper understanding of Inuit culture and heritage, the Royal Canadian Navy (RCN) will affiliate each of its six new Arctic Offshore Patrol Ships (AOPS) with regions of the Inuit Nunangat, the Inuit homeland that stretches through much of Canada’s Arctic, officials announced Monday.

The first such affiliation, between the future HMCS Harry DeWolf and the Qikiqtani region of Nunavut, was unveiled in Iqaluit on Monday during a visit by Commander Corey Gleason, the captain of Canada’s first AOPS.

“Affiliation is an important naval tradition, and I am honoured that the crew of HMCS Harry DeWolf will perpetuate this custom with communities of the Qikiqtani region,” Gleason said in a statement.

“As Commanding Officer of the future HMCS Harry DeWolf, my ship’s company and I look forward to operating in our Northern waters and to engaging with communities throughout the region.”

Defence Minister Harjit Sajjan said strengthening the military’s relationship with Inuit communities helps the Canadian Armed Forces to enhance its awareness of issues that confront those living in the North, and will contribute to a more meaningful engagement and enduring presence in the Arctic.

The remaining five ships will be affiliated with the Kitikmeot and Kivalliq regions of Nunavut as well as the Inuvialuit region in the Northwest Territories, Nunavik in Quebec, and Nunatsiavut in northern Labrador as each AOPS is built and enters service, officials said.

“We are excited to welcome you, and work with you to protect Canada’s Arctic,” said Premier of Nunavut Joe Savikataaq.

Inuit have been an integral part of Canada’s efforts to establish sovereignty in the Arctic, said P.J. Akeeagok, president of the Qikiqtani Inuit Association.

Akeeagok spoke about the federal government’s efforts to protect its sovereignty in the Arctic in the 1950s by relocating Inuit communities into previously uninhabited islands in the High Canadian Arctic where they established the communities of Resolute Bay and Grise Fjord.

In 2010, the federal government apologized for those forced relocations.

“From Sanikiluaq on the Belcher Islands to Grise Fiord, in the High Arctic, Inuit were relocated to various Qikiqtani communities to establish Canada’s presence in the region,” Akeeagok said in a statement.

“Today we embark on a new chapter in Arctic sovereignty, a chapter marked by dialogue and cooperation.”

In addition to the six AOPS for the navy, the Liberal government announced this month that it will purchase two additional civilian versions of the ships for the Canadian Coast Guard.

Last week the federal government filed a claim to sovereignty over an extended continental shelf in the Arctic that includes the seabed beneath the North Pole.