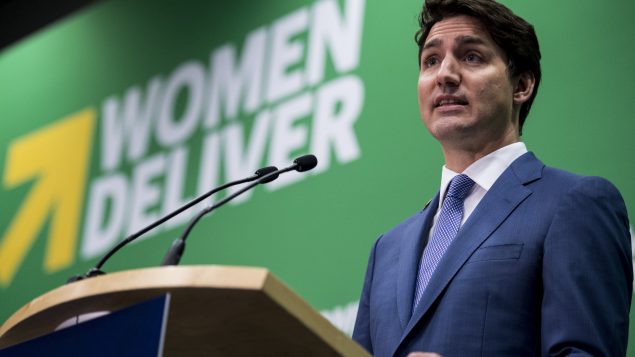 The Liberal government accepts the finding of a national commission of inquiry that the murders and disappearances of Indigenous women and girls across Canada in recent decades amount to an act of “genocide,” Prime Minister Justin Trudeau said Tuesday.

But Trudeau also urged Canadians to focus on solutions to the ongoing crisis rather than dwell on the past or spend their energy on debates over the definition of genocide.

The inquiry report described the deaths and disappearances as “a race-based genocide.”

“We accept the findings of the commissioners that it was genocide,” Trudeau told reporters in Vancouver.

“But our focus is going to be, as it must be, on the families, on the communities that have suffered such loss, on the systems that have repeatedly failed Indigenous women and girls across this country.”

Trudeau said his government will present an action plan in coming months to deal with recommendations made in the report.

‘A race-based genocide of Indigenous Peoples’ 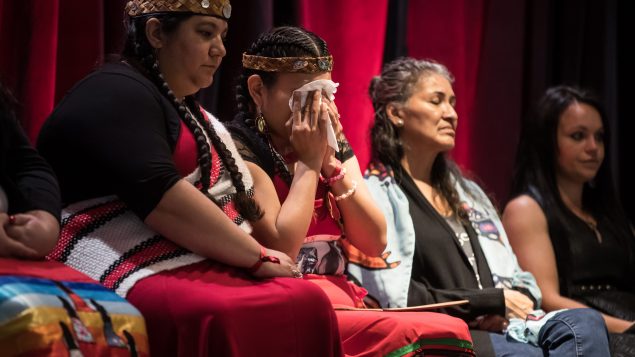 Lorelei Williams, second left, whose cousin Tanya Holyk was murdered by serial killer Robert Pickton and aunt Belinda Williams went missing in 1978, wipes away tears while seated with Rhiannon Bennett, from left to right, Sophie Merasty and Summer Rain Bentham, after responding to the report on the National Inquiry into Missing and Murdered Indigenous Women and Girls, along with other Indigenous women and allies in Vancouver, on Monday June 3, 2019. (Darryl Dyck/THE CANADIAN PRESS)

Entitled Reclaiming Power and Place, the report, presented at an emotional ceremony at the Canadian Museum of History in Gatineau, Quebec, comes with 231 individual “Calls for Justice” – recommendations directed at governments, institutions, social service providers, industries and all Canadians.

“This violence amounts to a race-based genocide of Indigenous Peoples, including First Nations, Inuit, and Métis, which especially targets women, girls, and 2SLGBTQQIA people.”

The report describes Canada as a country at war, where “Indigenous women, girls, and 2SLGBTQQIA people are under siege.”

Thousands of Indigenous women, girls, and 2SLGBTQQIA have been lost to the “Canadian genocide” to date, the report says.

Is it a genocide? 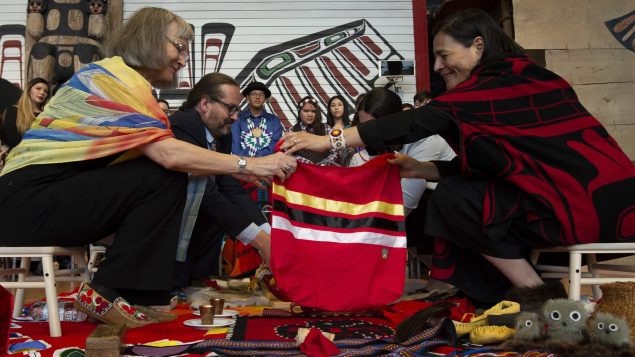 Commissioners Marion Buller (left) and Commissioner Michele Audette prepare the official copy of the report for presentation to the government during ceremonies marking the release of the Missing and Murdered Indigenous Women report in Gatineau, Monday June 3, 2019. (Adrian Wyld/THE CANADIAN PRESS)

The inquiry’s finding of genocide sparked a debate over the use of the term.

Retired Lt.-Gen. Roméo Dallaire, who oversaw the 1994 UN mission in Rwanda that failed to prevent that country’s genocide, told CBC News he has “a problem” with how the inquiry used the word.

“My definition of genocide, I read it very deliberately at the start of the Rwandan genocide, and it was a deliberate act of a government to exterminate deliberately, and by force and directly, an ethnicity or a group or an entity of human beings,” Dallaire said.

Frank Chalk, a historian, a genocide scholar and author, said there is “a strong case to be made” that Canada’s Indian Residential Schools system and the policy of forcibly removing Indigenous children from their families in the late 19th and much of the 20th century “constituted an act that does fulfil the United Nations’ definition of acts of genocide in Article II of the Genocide Convention.”

“I think a very strong case could have been made while that was underway that at least after 1951, when the Genocide Convention came into force as an international criminal law under a treaty, that the perpetrators of those kidnappings were committing an act of genocide,” Chalk, professor of history and research director of the Montreal Institute for Genocide and Human Rights Studies at Concordia University, told Radio Canada International.

(click to listen to the full interview with Prof. Frank Chalk)

On the other hand, Chalk said the murders and disappearances of Indigenous women and girls point to a failure by the justice system to carry out a “coherent and sustained search for their killers.”

“That’s an omission that showed a failure to protect the women and omissions like that are sometimes categorized as crimes against humanity,” Chalk said.

However, instead of focusing on whether the word “genocide” accurately describes the Indigenous experiences in Canada, Canadians ought to focus on delivering on the 231 recommendations of the inquiry, Chalk said.

“The worst thing we could do is to spend all of our time discussing the definitions of genocide,” Chalk said.

Perils of expanding definition of genocide

He also cautioned against revising the current internationally accepted definition of genocide as championed by some scholars to specifically include the “slow death” imposed on Indigenous people in Canada, such as attempts to destroy Indigenous cultures and languages, Indigenous governmental institutions and economies.

Many countries would like to see the guidelines and the laws that exist today disappear, he added.

“We have to be really careful that we don’t open a can worms in which by attempting to expand the definition of genocide we lose the entire Genocide Convention and the General Assembly and the Security Council vote to not keep it in force,” Chalk said. “This has to be done with great planning and care, and it probably won’t succeed several attempts before we are able to get amendments to the convention.”