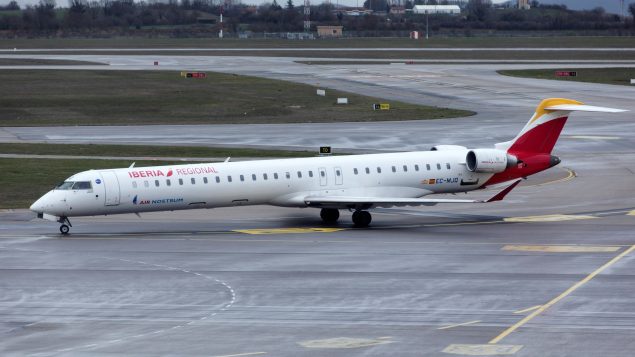 An Iberia Bombardier CRJ-1000 plane is seen on the tarmac at the Saint-Exupery airport in Colombier-Saugnieu near Lyon, France, March 14, 2019. (Emmanuel Foudrot /REUTERS)

Bombardier in talks with Mitsubishi on deal involving CRJ program

Canadian transportation giant Bombardier Inc. could be one step closer to exiting the commercial aviation business.

The Montreal-based plane and train maker confirmed Wednesday it’s in talks with Japan’s Mitsubishi Heavy Industries for a possible deal involving Bombardier’s CRJ (Canadair Regional Jet) program but said it would not comment further on the nature of the discussions.

“Before any agreement can be reached further review and analysis by Bombardier management and approval by Bombardier’s Board of Directors are required, and Mitsubishi Heavy Industries Ltd. must complete its due diligence review and own analysis and approval process, which are outside of Bombardier’s control,” the statement read. “There can be no assurance that any such discussions will ultimately lead to an agreement.”

Mitsubishi also confirmed Wednesday it’s in talks with Bombardier but said a decision has not been made. The company did not provide any details about the structure of the possible transaction.

However, some industry insiders expect that an announcement could come as soon as the Paris Air Show, which starts June 17.

The deal would mark the end of a historic chapter for Bombardier in commercial aviation as it looks to shift its focus to trains and luxury business jets as part of a broader turnaround plan.

The regional jet program once produced the bulk of Bombardier’s revenue, but trains and business aircraft have since overtaken regional jetliners as the company’s main drivers of profit. About 1,500 of the CRJ planes are in service worldwide.

In 2017, Bombardier sold a majority stake in its CSeries passenger jet business to European aerospace giant Airbus for no cost, which rebranded it as the A220.

Mitsubishi’s efforts to build its own regional jet – named the MRJ – have been plagued by difficulties after aborted test flights and cost overruns.

Mitsubishi is working to certify the MRJ, which has been delayed by several years with first customer ANA Holdings Inc now expecting delivery in 2020 rather than in 2013 as originally planned.

It is not yet clear how an agreement between Bombardier and Mitsubishi, if the transaction is completed, would affect CRJ production or what the value of the deal would be.

With files from Reuters and Bloomberg News