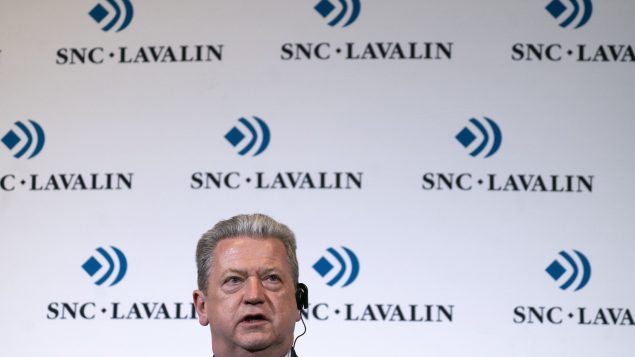 Neil Bruce, president and CEO of SNC-Lavalin, responds to a question during a news conference following the engineering company's annual shareholders meeting in Montreal on Thursday, May 2, 2019. (Paul Chiasson / THE CANADIAN PRESS)

The Canadian construction and engineering giant at the centre of a political scandal that shook the Liberal government of Prime Minister Justin Trudeau, announced a major leadership shakeup Tuesday.

SNC-Lavalin said that its chief executive Neil Bruce is retiring from the company.

Ian Edwards, the company’s chief operating officer, has been named interim chief executive and will join the board of directors, the Montreal-based company said in a press release.

Bruce, who is returning to his family in the United Kingdom, is expected to remain an adviser to the board until the end of the year.

SNC also said that the board of directors has asked Edwards to undertake a review of the strategic direction of the company.

A Quebec judge ruled last month there was enough evidence to send SNC-Lavalin to trial over charges of fraud and corruption.

The company is accused of having paid more than $40 million in bribes to Saadi Gaddafi, the son of former Libyan dictator Muammar Gaddafi, to obtain national contracts in the North African country.

The company has pleaded not guilty.

The engineering and construction firm has been at the centre of a political controversy following accusations by former attorney general Jody Wilson-Raybould that top government officials pressured her to overrule federal prosecutors and negotiate a deferred prosecution agreement with the company.

The scandal has also resulted in the resignation of Trudeau’s principal secretary Gerald Butts and the early retirement of Michael Wernick, the former clerk of the Privy Council.