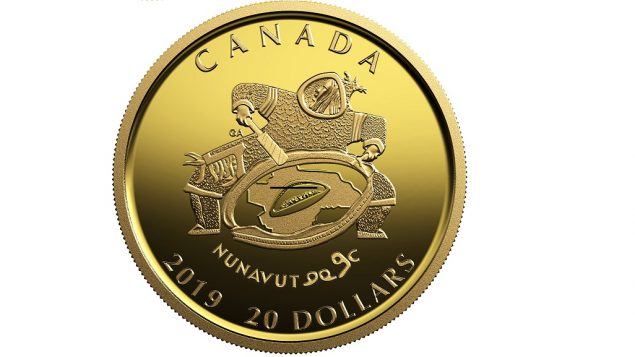 The Royal Canadian Mint has issued a collector coin to commemorate the 20th anniversary of the eastern Arctic territory of Nunavut, and made the coin with gold mined from the region.

Nunavut celebrated its 20th anniversary on April 1 of this year. On that date in 1999, the territory was created out of the eastern part of Canada’s Northwest Territories, a region with a majority Inuit population.

This year’s collector coin, with a face value of $20, features the image of an Inuit drum dancer on one side, along with the word Nunavut written in both the Latin alphabet and in the syllabic orthography used for the main Inuit language dialect used in the territory, Inuktitut.

The drum dancer image, created by Germaine Arnaktauyok from the Nunavut community of Igloolik, is the same image used on a $2 circulation coin issued at the time of Nunavut’s creation in 1999.

“It’s a great work of art from a renowned Inuit artist,” said Alex Reeves, the senior manager of public affairs at the Royal Canadian Mint, in a phone interview. 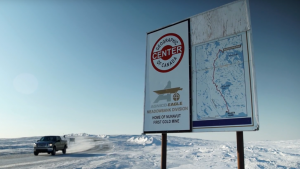 The road to the Meadowbank Mine in Canada’s eastern Arctic territory of Nunavut. The gold in a new commemorative coin was mined here and in Hope Bay in western Nunavut. (Eye on the Arctic)

“Using the design that was issued in 1999 and breathing new life into it on a pure gold coin this time, instead of a circulation coin, is a nice way to pay tribute to the territory of course and to its many talented artists as well.”

The coin is made of gold mined at Agnico Eagle Mines’ Meadowbank Mine, near the Nunavut community of Baker Lake, and from the TMAC Resources’ mine near Hope Bay in the western region of the territory.

“We decided it would be really nice to come up with a coin that celebrated the territory and promoted its reputation as a gold producer,” Reeves said.

There are 1,500 of the limited edition coins for sale. They cost $359.95 and are available on the mint’s website: www.mint.ca 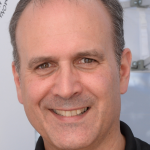 For more of Eye on the Arctic‘s conversation with Alex Reeves from the Royal Canadian Mint, listen here: