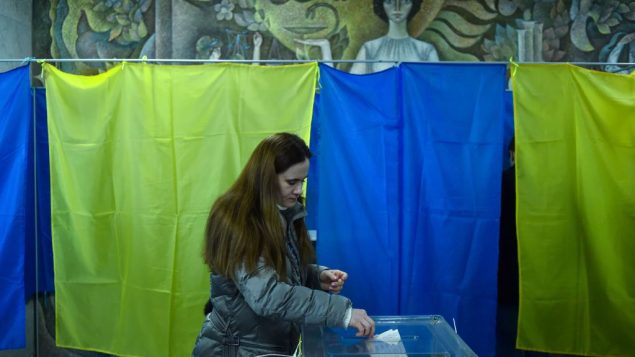 A woman casts her ballot at a polling station during Ukraine's presidential election in Kiev on March 31, 2019. (Sergei GAPON/AFP/Getty Images)

While the threat of insidious Russian interference in the upcoming parliamentary elections in Ukraine preoccupies all Western election observers, the head of Canada’s election observation mission says he is also worried about the low participation rate of women candidates.

Ukrainians are set to vote for a new parliament on July 21. But, while women make up half of Ukraine’s population, they made up only 11.6 per cent of deputies in the Ukrainian parliament when Volodymyr Zelenskiy dissolved the Verkhovna Rada minutes after he was sworn in as the country’s new president on May 20.

That number is less than half of the global average for women in parliament, which stands at 24.3 per cent, and well below the European average at 28.5 per cent (Canada is at 26.9 per cent).

“I think one of the big issues in terms of the validity of democratic elections is the very low participation rate of women as candidates, as political choices,” says Lloyd Axworthy, head of the Canadian election monitoring mission in Ukraine. “Women are certainly active in the election process itself but the number of women participating or being elected is very-very low.” 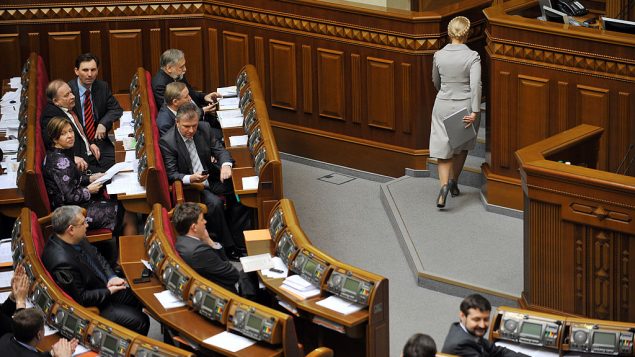 Out of the 193 countries on the Inter-Parliamentary Union database, Ukraine is ranked 156th – the lowest ranked European country on the list, according to the International Foundation for Electoral Systems (IFES).

IFES is calling for a reform of the electoral system and special measures to bring Ukraine closer to global and European levels of women’s representation.

The international NGO, which is supported by the governments of Canada, the U.S. and U.K., is calling on all political parties to run more women in the upcoming parliamentary election.

“To make a real change in how many women are elected, political parties must place these women prominently and high on their candidate lists,” the statement by IFES says. At an “absolute minimum,” parties must strive to field two women for every five candidates on their list, IFES says.

Under Ukraine’s mixed electoral system, which reserves half of parliament seats for deputies elected on party lists and the other half for single-member constituencies, this measure would result in about 90 women getting elected through party lists, IFES says.

“This is still only around 20 per cent of the full parliament,” the statement says. “Political parties must also run substantially more women in winnable single-member constituencies.”

Without higher rates of participation by women politicians, it will be hard for Ukraine to realize its full potential, Axworthy says. 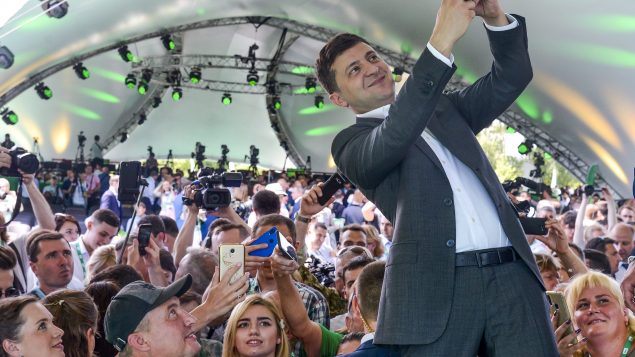 Ukrainian President Volodymyr Zelenskiy takes a selfie at the first congress of his party called Servant of the People in the city Botanical Garden, Kiev, Ukraine, Sunday, June 9, 2019. The congress revealed the party list for the upcoming parliamentary elections, scheduled for July 21. Servant of the People is the name of a television series in which Zelenskiy, who was a comedic actor before becoming president, portrayed a schoolteacher elected president. (Zoya Shu/AP Photo)

Zelenskiy, 41, who played the president of Ukraine in a widely popular satirical TV series Servant of the People, won nearly 73 per cent of votes in a run-off election in April, beating the incumbent, Petro Poroshenko.

The comedian and entrepreneur-turned-politician, who has promised to tackle the endemic corruption in the country and boost Ukraine’s sluggish economy, hopes that his party, named Servant of the People in reference to the popular TV series, will repeat his electoral success and will form a majority government for the first time since Ukraine became independent in 1991.

“I guess the thing I find the most interesting in this election in particular, clearly the Maidan had really unified a lot of Ukrainians around the need to start reforming their government and getting rid of the oligarchs and the corruption, which why I think  Poroshenko didn’t do so well,” Axworthy says. 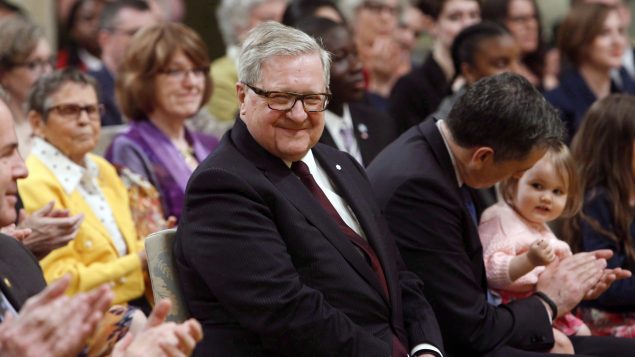 Former Liberal cabinet minister Lloyd Axworthy (left) looks on before being presented with the 30th Pearson Peace Medal during a ceremony at Rideau Hall in Ottawa on Wednesday, May 24, 2017. (Fred Chartrand/THE CANADIAN PRESS)

As a veteran federal Liberal politician who fought nine elections, Axworthy says he was asked by Foreign Affairs Minister Chrystia Freeland, one of the most prominent members of Canada’s 1.3 million strong Ukrainian community, to lead the Canadian observation mission in the 2019 presidential and parliamentary elections.

CANADEM, an international NGO, has been managing the deployment of Canadian experts to the Organization for Security and Cooperation in Europe (OSCE) Special Monitoring Mission to Ukraine since 2014.

But Freeland also wanted an experienced politician to represent Canada’s interests in these “watershed” presidential and parliamentary elections, says Axworthy, a former Canadian foreign affairs minister, who was nominated for a Nobel Peace Prize for his work on the international treaty to ban landmines.

The federal government set aside a budget of almost $20 million to not only observe the elections, but also to help Ukraine develop some electoral technologies and training in identifying cyber interferences and other threats to the integrity of the electoral process, Axworthy says.

“The government has made a very big commitment, which I think reflects the minister’s and the government’s priority with Ukraine to do everything it can to help it evolve into a democratic country,” Axworthy says.

Since 2004, Canada has deployed nearly two thousand Canadian independent election observers to monitor 11 elections in Ukraine, according to CANADEM.

The investment by Canada and its Western partners in Ukrainian elections reflects the importance they attach to fostering democracy in Ukraine, Axworthy says.

Canada’s participation in these election observation missions also helps to promote a sense of civic duty among Canadian participants, he says. 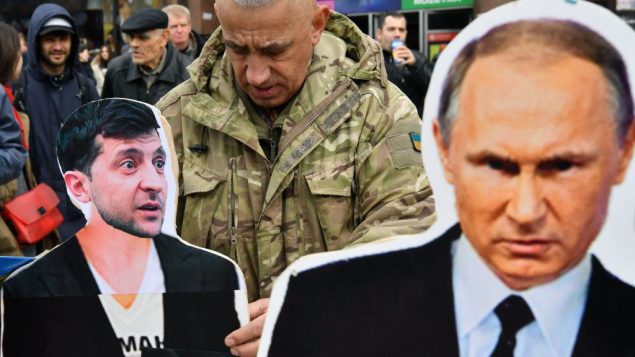 An activist sets up cardboard cutouts depicting presidential candidate Volodymyr Zelensky (L) and Russian President Vladimir Putin prior to a protest themed ‘Down with the fifth column of Ukrainian policy’ in the center of Kiev on March 29, 2019, displaying the pro-Russian candidates ahead of the presidential election on March 31. (Sergei SUPINSKY/AFP/Getty Images)

Having third-party observers monitor the election process gives Ukrainians more confidence in the outcomes of the election, he says.

During the last round of presidential elections in April, Canada had about 160 election observers in Ukraine, including analysts and communications experts based in Kyiv, Axworthy says.

“Because we’re investing a fair amount of time trying to assess and evaluate the impact of Russian interference on social media, we had a couple of people who were focusing on that issue,” Axworthy says.

The first group of 50 long-term Canadian observers for the parliamentary election arrived in Ukraine in mid-June. They have been deployed to all Ukrainian regions, oblasts, in which the elections will take place.

An additional group of 128 short-term observers will also be deployed a week before the election. 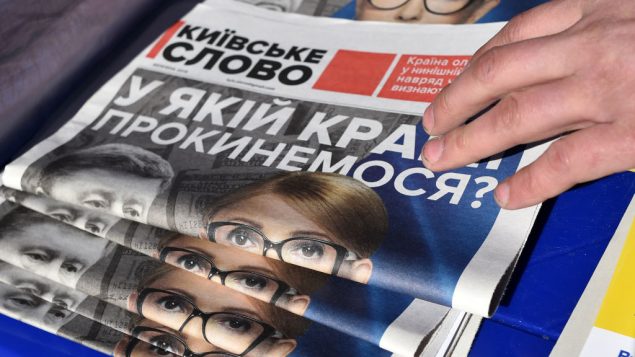 A supporter of the former Ukrainian Prime Minister and presidential candidate Yulia Tymoshenko distributes campaign newspapers featuring portraits of the candidates – Yulia Tymoshenko and Petro Poroshenko, in Kiev, on March 28, 2019, ahead of Ukraine’s presidential elections on March 31. (Photo by Sergei GAPON/AFP/Getty Images)

They will observe all aspects of the parliamentary electoral process, and assess compliance with international standards for democratic elections and domestic laws, as well as look into various trends and potential trouble spots, Axworthy says.

“We have a system of reporting that virtually hourly certain observer posts check off certain things that are being done or not being done,” Axworthy says.

The Canadian monitors will evaluate the general political context, the work of the electoral administration, the media environment and the participation of women, internally displaced persons and minorities in the election, Axworthy says.

All these things influence the election, he says.

“I think classic election observation, which is the mechanics, the carrying out of the vote and the counting, are really awfully important. But increasingly important is the interference of cyber media with an attempt to change or shape people’s views using defamatory or nasty sort of messages and information,” Axworthy says. “And that’s becoming equally a threat or risk to undermining the integrity of the systems.”

The Canadians will be spending a lot of their time looking at these threats, he says.

“Because the Russians are masters of it and the Ukrainians have had to put up with it for probably more than any other country in the world,” Axworthy says.

One of the big surprises of the presidential election was the relatively strong showing by pro-Russian candidates, Axworthy notes.

Ukraine’s parliamentary system and the regional character of its politics make it more likely that these pro-Russian forces will form a more coherent coalition in the Verkhovna Rada, Axworthy says.

The emergence of pro-Russian forces in the Ukrainian parliament is something that Canadian officials will be watching for, he says.

“In a way Ukraine has a very important presence as a place that’s right on the borders with Mr. Putin and his efforts to undermine democratic systems and I think everybody feels this is a battle we’re all into and we all have to support,” Axworthy says.