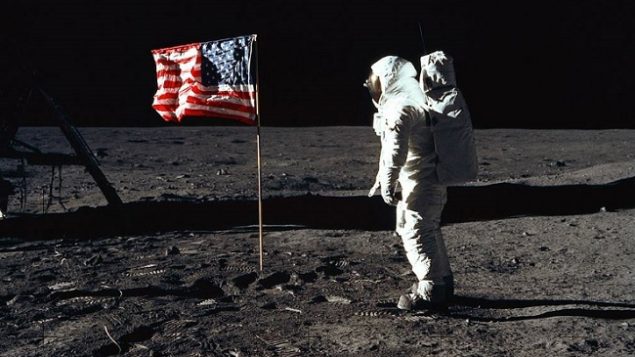 U.S. astronaut Buzz Aldrin stands on the moon before a U.S. flag during the first lunar landing on July 20, 1969. The photo was taken by astronaut Neil Armstrong. (NASA)

On July 20, 2019, six Canadian astronauts will host events across Canada to mark the 50th anniversary of man’s first steps on the moon.

Four days later, one remained in orbit around the moon while two others landed on the moon in the Lunar Module called the Eagle. They got out, walked around, collected bits of dirt and rocks and planted an American flag.

To commemorate that first moonwalk, Canadian astronaut David Saint-Jacques will host an event at the Montreal Science Centre and astronaut Robert Thirst will be at the Ontario Science Centre in Toronto. Four other astronauts will be linked to them by video from locations in St. John`s, Ottawa, Regina and Vancouver. Each venue will have its own special programming.

The second version of the Canadarm was used on April 17, 2015 to reach out from the International Space Station and capture the Space X Dragon cargo spacecraft. (AP Photo/NASA)

Canada has been an active participant in NASA space missions, regularly sending its own astronauts to the International Space Station and providing specialized equipment like the Canadarm, a robotic arm deployed from spacecraft.

Canada is also participating in the development of the Lunar Gateway, a science lab for future missions to the surface of the moon. Canada will contribute a new, smart robotic arm. The Canadian Space Agency says it will be able to maintain, repair and inspect the Gateway, capture vehicles, relocate Gateway modules, help astronauts during spacewalks and enable science in lunar orbit and on the surface of the moon.

Chris Hadfield was one of several Canadian astronauts to go into space. He flew two shuttle missions, was the first Canadian to walk in space and commanded the International Space Station from which he sent hundreds of photos and held live news conferences. (Paul Chiasson/The Canadian Press/Jan. 10, 2013)