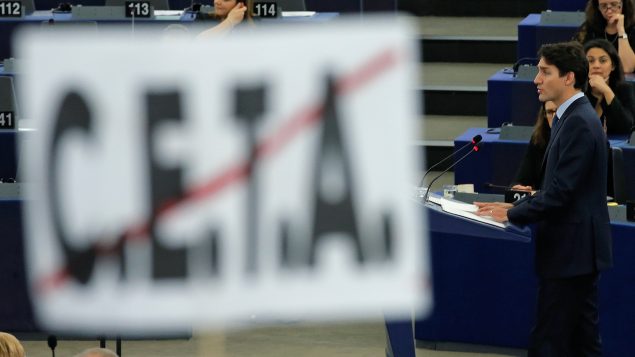 As the French National Assembly gets ready to vote Wednesday on ratifying a landmark free trade deal between Canada and the European Union, a group of Canadian opposition legislators is urging their French counterparts to reject the Canada-European Union Comprehensive Economic and Trade Agreement (CETA).

CETA will only enter into force fully and definitively, when all EU member states have ratified the agreement.

An open letter signed by New Democratic Party Leader Jagmeet Singh and Green Party Leader Elizabeth May says CETA does not offer appropriate safeguards to address the “climate crisis” and the “rampant inequality crisis affecting us all.”

“CETA works against our common desires,” says the letter released Monday. “CETA is based on a blueprint for trade that gives incredible rights to corporations—in the areas of protection, patents, public services, regulatory harmonization, and food and agriculture—without extending comparable rights to people, communities and the environment.” 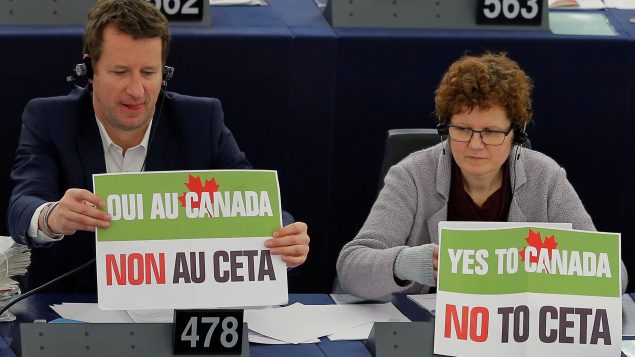 French politician Yannick Jadot (L), green party EELV (Europe-Ecologie-les-Verts) candidate for the 2017 French presidential election and Member of the European Parliament sits behind a placard that reads “Yes to Canada, No to CETA” as he waits for the start of a voting session on the Comprehensive Economic Trade Agreement (CETA) between the EU and Canada, in Strasbourg, France, February 15, 2017. (Vincent Kessler /REUTERS)

The deal also fails to create strong labour and environmental provisions that are binding, the authors of the letter argue, adding that it will lead to losses on both sides of the Atlantic.

“Canada and Québec’s farmers will see their supply management system threatened, while European farming standards will face pressure from big agribusiness,” the letter says. “In Canada, our patent rules have already been changed, thereby raising costs of medicines for the population.”

The Liberal government of Prime Minister Justin Trudeau defends the deal, saying it has already led to an increase in trade between Canada and the EU.

CETA ratification will be one of the main topics of discussion Wednesday when Trudeau hosts EU leaders in Montreal for a two-day Canada-EU summit.