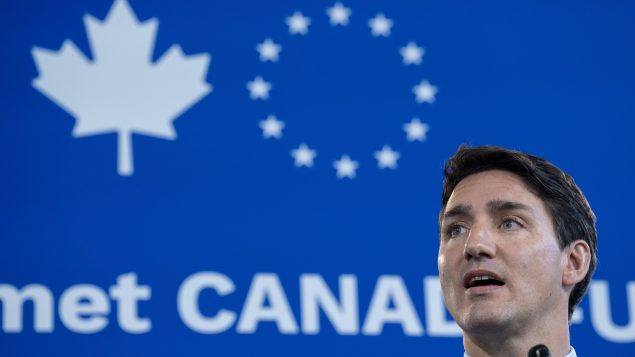 Prime Minister Justin Trudeau responds to a question during the closing news conference of the Canada-EU Summit in Montreal on Thursday, July 18, 2019. (Paul Chiasson/THE CANADIAN PRESS)

Prime Minister Justin Trudeau condemned as “hurtful, wrong and completely unacceptable” comments by supporters of U.S. President Trump, who chanted “send her back” at a rally in North Carolina on Wednesday in reference to a Muslim member of Congress.

“I want everyone in Canada to know that those comments are completely unacceptable and should not be allowed, encouraged in Canada,” he told reporters in Montreal Thursday during a joint press conference with President of the European Council Donald Tusk and European Trade Commissioner Cecilia Malmstrom.

Speaking at the conclusion of the Canada-EU summit Tusk said while didn’t want to comment on the internal U.S. politics in Canada, he felt compelled to react.

“I’ve been, for many years, one of the most pro-American politicians in Europe,” Tusk said. “It’s difficult to understand some facts, some words and sometimes if you feel that something is totally unacceptable, you have to react despite business, despite interests. For me, values are much more important than trade, sorry, maybe I’m old fashioned but I will never change my opinion here.”

On Thursday, Trump attempted to distance himself from the chants targeting Democratic Congresswoman Ilhan Omar, a Muslim who came to the U.S. as a refugee from Somalia.

.”I felt a little bit badly about it,” Trump told reporters at the White House when asked about the chants, which drew an outpouring of criticism. “I disagreed with it. But again I didn’t say that. They did. And I disagreed with.”

Speaking in the Oval Office, Trump claimed he tried to stop the chant, which came after he recited a litany of complaints about Omar. Video shows the president pausing his remarks, appearing to drink in the uproar and not admonishing his supporters as they chanted.

“I was not happy with it,” Trump said a day later as some prominent Republicans criticized the chant at the president’s re-election event. He said he “would certainly try” to stop the chant should it return at a subsequent rally.