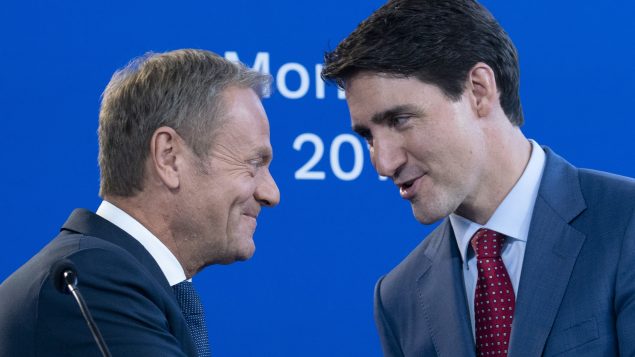 Canada and the European Union are close to agreeing to a possible temporary solution to save the World Trade Organization (WTO) from paralysis induced by the Trump administration’s policy of blocking appointments to the global trade body’s dispute resolution mechanism, Prime Minister Justin Trudeau said on Thursday.

U.S. President Donald Trump is barring appointments to the WTO’s Appellate Body, saying its judges have overstepped their mandate and ignored their instructions.

“The growing number of vacancies on the Appellate Body, which helps resolve disputes between members, is especially concerning,” Trudeau told reporters in Montreal Thursday during a joint press conference with President of the European Council Donald Tusk and European Trade Commissioner Cecilia Malmstrom.

“A credible, functioning dispute resolution mechanism is critical to our success as a trading nation.”

If no solution is found to the current impasse, the world’s top trade court will be unable to hear appeals in international trade disputes by December, Trudeau said at the conclusion of the two-day Canada-EU summit held in Montreal. 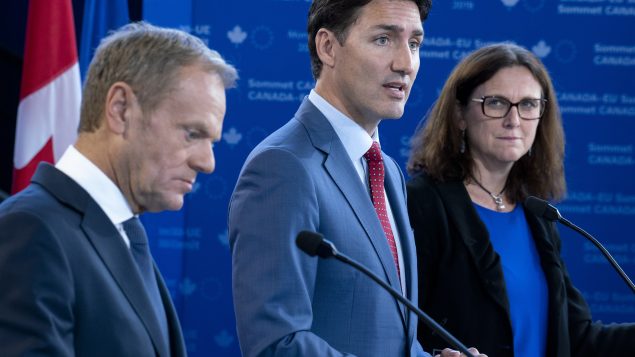 President of the European Council Donald Tusk and European Commissioner for Trade Cecilia Malmstrom listen to Prime Minister Justin Trudeau respond to a question during the closing news conference of the Canada-EU Summit in Montreal on Thursday, July 18, 2019. (Paul Chiasson/THE CANADIAN PRESS)

“But in the event those efforts are unsuccessful, we need to be prepared,” Trudeau said.

Canada has been working with the EU to find an “interim fix,” he said.

“After this summit we are closer to finalizing an agreement which would help preserve the function of an appeal system within the WTO until we find a more permanent solution,” Trudeau said.

A joint statement issued after the Montreal meeting said the fix involved setting up an interim appeal arbitration arrangement based on existing WTO rules.