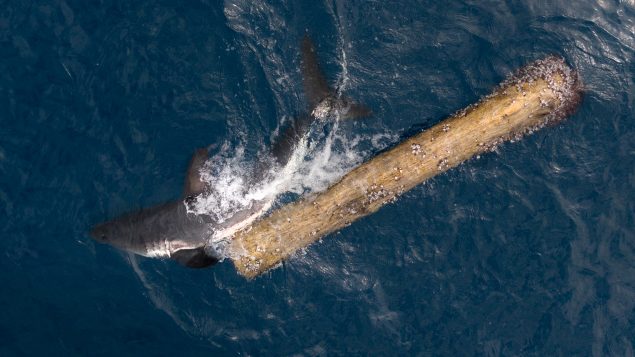 A group of Canadian scientists studying Pacific seamounts off the coast of British Columbia have captured unique footage of a shark using a drifting log it came across in the middle of the ocean to scratch itself and try to dislodge parasites on its body.

The scientists, who are part of the Pacific Seamounts Expedition 2019 aboard the Canadian Coast Guard Ship (CCGS) J.P. Tully, were on a small boat deploying underwater gliders on top of Explorer Seamount, about 250 kilometres off the coast of northern Vancouver Island, when they came across the 2-metre-long male salmon shark and a barnacle-encrusted log that was drifting nearby.

“In seeing this log it immediately reacted to lunge towards the log, heave its body up on it and use its momentum – quite a lot of power – to slide across it to scratch itself,” said Cherisse Du Preez, a marine biologist at the Institute of Ocean Sciences at Fisheries and Oceans Canada.

“And in the half hour we were watching it, it never stopped. It didn’t care about us.”

Speaking to Radio Canada International on the phone from CCGS J.P. Tully, Du Preez said since witnessing the strange behaviour last Friday she has been doing some research, but she can’t find any evidence that this behaviour has been seen before, never mind documented.

Initially the scientists, who were observing the shark from a boat, thought it was trying to knock off some animals off the log and eat them, Du Preez said.

It was only after reviewing their drone and underwater footage, did the researchers realize that the shark was just scratching, Du Preez said.

“It was using this tool like a bear would use a tree to scratch parts of its body that it can’t reach,” Du Preez said. “And that’s incredible, that’s speaking to the intelligence of these animals and their ability to adapt.” 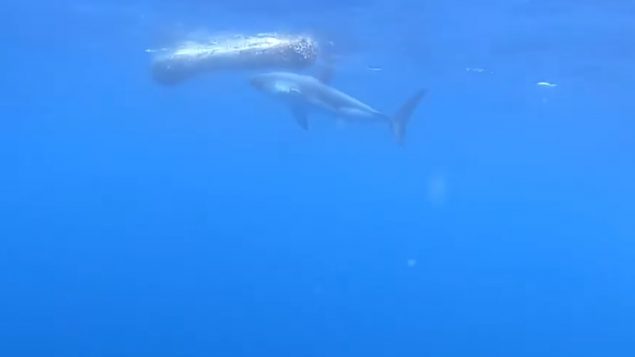 In coastal waters a shark could swim to the sea floor quite easily, but in deep waters sharks can’t reach the ocean floor to scratch themselves, she said.

“So coming across this log it found a scratching post and it knew exactly what to do and, undisturbed by us, it just went about its natural behaviour that nobody had ever seen before,” she added.

Du Preez said the encounter also demonstrates the diversity of marine life in the area they are studying.

“It’s not just the sea floor that is so rich here,” Du Preez said. “We’re seeing sharks, we’re seeing whales, seals, there is a lot of life out here.” 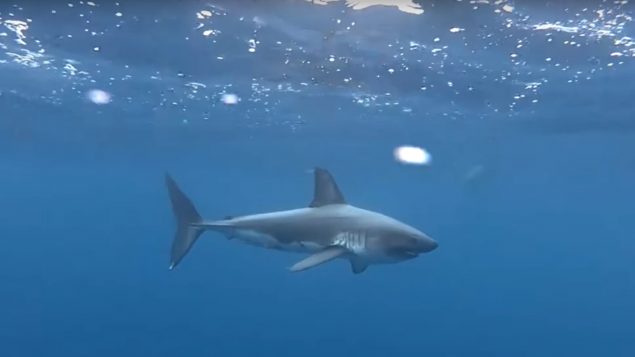 It also underscores the importance of protecting sharks because of the role they play in marine ecosystems, she said.

“This is just a perfect example of unbiased peace of scientific documentation that speaks to the complexity and intelligence of these animals,” Du Preez said. “It’s no longer the mentality of ‘Jaws’, the movie, or the mindless monster in the deep. It’s an intelligent animal that has a complex life.”

In June, Canada passed legislation that outlaws the trade in shark fin products and effectively removes the country, the largest shark fin importer outside Asia, from the trade.