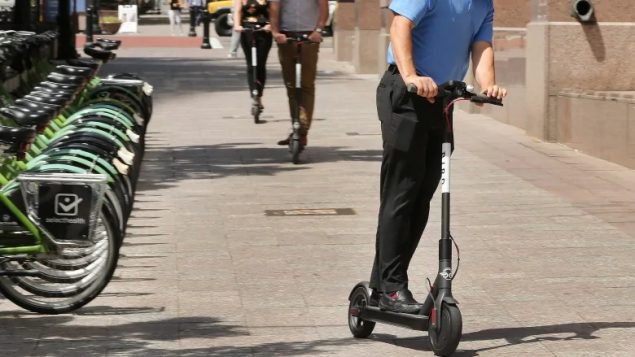 Someone rides a Bird electric scooter ridden in Salt Lake City. E-scooters which have caused both delight and rage in other cities around the world, have arrived in Canada.. (The Associated Press)

Canadians shoulg get ready to see people whizzing past on e-scooters on sidewalks, bike paths, and streets.

Already present in the western city of Calgary since last month, Lime electric scooters are now coming to Montreal starting this weekend.

Lime started last month in the Alberta city with around 300 with expectation to quickly rise to around 1,000 scooters. A startup called Roll hopes to bring about 200 e-scooters and 50 e-bikes to Kelowna, British Columbia this fall.

Lime is just one of many companies offering new e-mobility sharing services in major cities around the world.

Montreal will start this weekend with about 240 of the e-scooters. While some jurisdictions don’t require helmets, they will be needed in most Canadian situations. (Brendan McDermid-Reuters)

The scooters are located for users and paid for using an app on your smartphone. The app also indicates how much power is left in the individual machine.

Unlike some bike sharing programmes, and other e-scooters, the Lime scooters are “dockless” and can be left at the person’s destination.

Cost is $1 to start and then 30 cents a minute thereafter.

Initially the Lime E-scooters had a programming problem that could result is sudden stops and some injuries, but those have since been resolved.

Also, at least one study has shown that the e-scooters are not nearly as eco-friendly as most believe.

They seem to have a relatively short life, often due to vandalism, often dumping them in rivers. In Paris this has been a big concern, In Portland Oregon, in June, divers pulled more than 50 from the Willemette River.

The “e-revolution”  in “micro-mobility devices” has not been without its problems with complaints from pedestrians and cyclists about close calls with people on e-scooters. e-skateboards, e-bikes, and e-mopeds.

Many of them can reach speeds of up to 70km/h, although the Lime scooters in Montreal will be limited to 20km/h.

Other complaints include the devices being left randomly on sidewalks blocking pedestrians.

In Canada, there are regulations where the scooters, and dockless e-bikes can be parked.

As it’s a new service, time will tell how these devices and the cities adapt to each other.