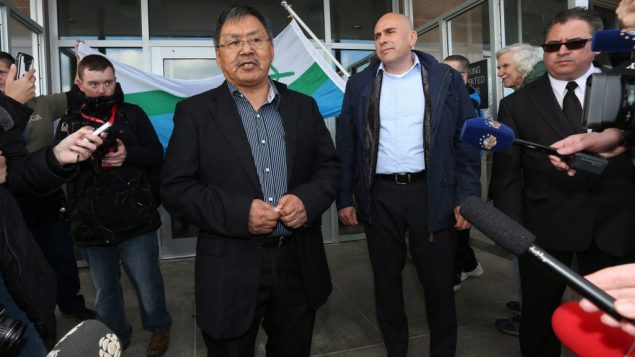 Johannes Lampe (left), president of the Nunatsiavut Government, talks to the media in the city of St. John's in 2016. (Paul Daly/The Canadian Press)

The president of Nunatsiavut, the Inuit region of the Atlantic Canadian province of Newfoundland and Labrador, says the beginning of the  impoundment  of the Muskrat Falls reservoir last week, is a danger to people in the region.

“Our many efforts to convince the Government of Newfoundland and Labrador and Nalcor Energy to take necessary measures to mitigate impacts of methylmercury on the Lake Melville ecosystem have all been in vain,and we are now at a point of no return where the health, culture and way of life of many Labrador Inuit hangs in the balance,” Johannes Lampe said in a news release on Thursday.

“The Impoundment of the Muskrat Falls reservoir has begun, and with it the start of a chain of events that will have significant impacts on Labrador Inuit and, in particular, the community of Rigolet.”

The Muskrat Falls hydroelectric project, pitched as green energy solution that would connect to the North American energy grid, has long been shrouded in controversy. 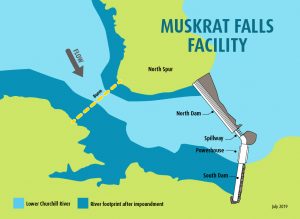 Its construction has gone over time and over budget. Indigenous peoples across Labrador have been protesting the project for years for its potential to negatively affect the environment and the fish and wildlife they rely on for food.

A public inquiry into the troubled project is currently underway in the province, with a final report expected by the end of the year.

In July, Lampe called on Newfoundland and Labrador provincial premier Dwight Ball to halt flooding of the Muskrat Falls reservoir, saying the risk of methylmercury contamination to the ecosystem is too great. Lampe said Nalcor Energy, the company behind the project, had budgeted funds to cap the wetlands but that they had not got environmental approval from the Government of Newfoundland and Labrador.

Methylmercury is a compound that can be created when mercury is converted into an organic form. This form can then be easily ingested by fish and other living organisms. In flooded areas, the water accelerates the breakdown of vegetation and speeds up the conversation of naturally occurring mercury in the soil into methylmercury. Excess consumption of food with high levels of the compound can be a risk to human health.

Many Inuit in Nunatsiavut still rely on fishing and hunting to feed their families.

Agreements with two out of three Indigenous groups

In July, Premier Dwight Ball announced the agreements made between Nalcor Energy, the NunatuKavut Community Council, which represents southern Inuit in the province, as well as the Innu Nation, to split the $30-million budget for capping between.

The Nunatsiavut Government however, declined such an agreement.

“We have said all along that compensation is not a form of mitigation,” Lamp said in the Thursday news release.  “We advised (Nalcor CEO) Mr. Marshall, as well as the Premier, that offering Labrador’s three Indigenous groups a share of this $30 million would be perceived as a form of compensation, or “hush money”.

“We remain adamant this money should have been used for what it was intended – to cap wetlands.” 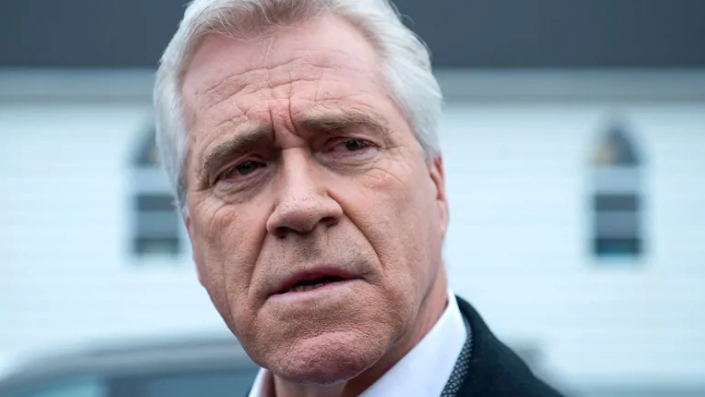 However, at the time Todd Russell, president of the NunatuKavut Community Council, in a July newsletter to members said the money was not compensation.

“Once it was confirmed that wetland capping would not proceed, Nalcor offered the budgeted thirty million dollars for equal distribution to Labrador’s three Indigenous groups,” the NCC said in the newsletter. “This money is not compensation or part of any deal on methylmercury.”

On Thursday, Lampe characterized the impoundment as a “ticking time bomb” for Labrador Inuit and said it goes against the move in Canada in recent years for governments to work on reconciliation with Indigenous peoples.

“The Nunatsiavut Government is extremely disappointment with the Government of Newfoundland and Labrador with the way it has handled the whole Muskrat Falls fiasco,” Lamp said.

“The Premier has repeated betrayed our trust by neglecting to respond, in writing or publicly, to our concerns and/or questions.

“If this is what reconciliation is all about, then we want no part of it.”

For more news on the Arctic, visit: