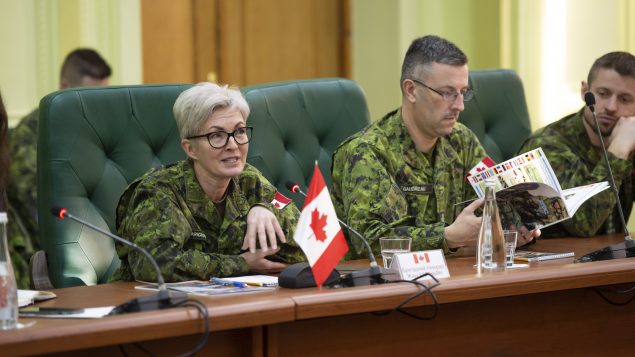 In 1986, Jennie Carignan was a bored teenager looking to do something challenging with her life.

So she decided to join the Canadian Armed Forces and enroll at the Royal Military College of Canada. She was among the first women to enter the Combat Engineer trade after all military occupations were opened to women in 1989.

Today, Maj.-Gen. Carignan is one of the highest-ranking women in the Canadian military and is the first and only woman from a combat arms trade to rise to the rank of general.

And in June of this year, Carignan who commanded 5 Combat Engineer Regiment and led a task force of engineers in Kandahar in 2009-2010 at the height of the Taliban insurgency in the restive Afghan province, smashed through another glass ceiling.

She was appointed to lead the NATO mission in Iraq and promoted to the rank of major-general.

“For me it’s a great honour and a privilege to be able to go out and do this,” Carignan told Radio Canada International in a phone interview from Kingston, where she’s undergoing training ahead of deploying to Iraq this fall.

“That’s why we join the military.”

(click to listen to the full interview with Maj.-Gen. Jennie Carignan) 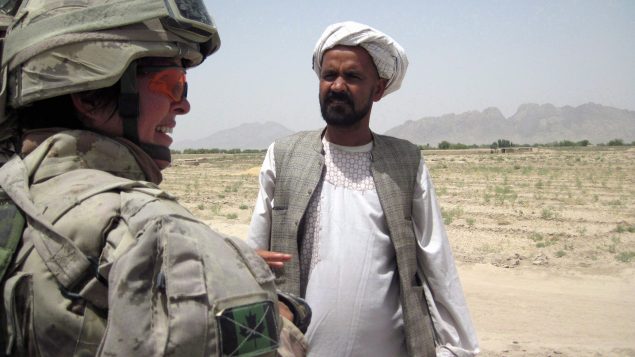 Lt.-Col. Jennie Carignan, commanding officer of the Engineer Regiment of Canada’s Task Force Kandahar, speaks to area resident Yar Mohammad about a retaining wall project near his village along the Tarnak River in the Dand Distrct of Kandahar province on August 12, 2010. Carignan figures she covered 10,000 km of bomb-riddled, dusty roads in Afghanistan as a combat engineer. (Dene Moore/THE CANADIAN PRESS)

Carignan, who will be taking over from another Canadian, Maj.-Gen. Dany Fortin, will command about 580 NATO trainers on the ground in Iraq, including the Canadian contingent of about 250 personnel.

Carignan, who currently commands the 2nd Canadian Division and Joint Task Force East in her native province of Quebec, said she never thought that she’d be making Canadian and NATO military history.

“I’ve basically done things one day at a time, going after one challenge at a time, making sure that I did the best I can,” the mother of four said.

Carignan’s experience as a frontline commander in Afghanistan and a former chief of staff of the army, and a reputation of a tough-as-nails leader will come in very handy in Iraq.

The NATO Mission Iraq (NMI) is a non-combat training and capacity-building mission aimed at building up Iraqi national forces to prevent the re-emergence of groups such as ISIS or al-Qaeda.

The trainers focus on educating Iraqi military instructors, who in turn train their own forces in bomb disposal, armoured vehicle maintenance, civilian-military planning and medical care.

Canada maintains a separate contingent of special forces troops in northern Iraq, who advise and assist local security forces in counter-terrorism operations against pockets of Islamic State extremists. While they’ve been defeated on the battlefield, Islamic State is still conducting a guerrilla-style campaign of terror and hit-and-run attacks.

Carignan said she’s been doing a lot of studying to learn about Iraq’s history and culture, and the region’s complex political context.

‘We need female and male warriors’ 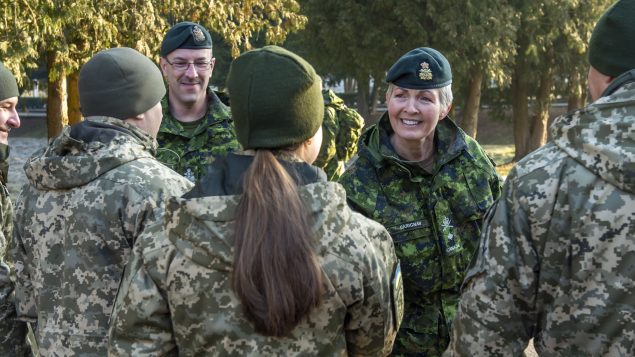 Brig.-Gen. Jennie Carignan speaks with Ukrainian soldiers being trained by members of the Canadian Armed Forces as part of Operation UNIFIER in Ukraine. (2nd Canadian Division)

Despite the challenges the Canadian military has faced in integrating women and stamping out sexual misconduct in the ranks, Carignan said her experience has convinced her of the advantages of gender-integrated fighting forces.

Carignan will begin her deployment in Iraq in mid-November.

Despite the upcoming year-long separation, she has full support of her children, Carignan said.

In the meantime, Carignan said she tries to squeeze in a bit of quality time with her family and to unwind whenever she can.

“I do a lot of outdoors camping, kayaking and hiking,” Carignan said. “I like arts, music, I’m a flamenco dancer. I get out there and I do other stuff that is not related to the military and I think that helps to take a little bit of a break and come up with ideas when you are exposed to subjects that are completely unrelated to the military.”