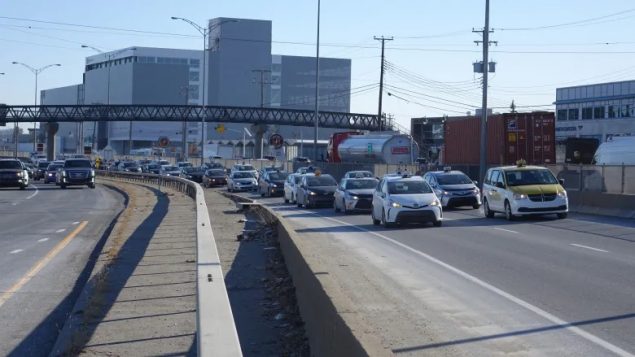 March:Taxi drivers cause a traffic jam on the highway leading to Montreal's airport as part of their ongoing protests over the provincial government plans to deregulate the industry. (Mathieu Wagner-Radio-Canada)

It will be difficult to find a licenced taxi in the morning in several cities of Quebec this week.

Taxi drivers in the province are staging a series of rotating strikes in various locations over provincial government plans to overhaul and deregulate the industry as a result of the arrival to ride-hailing services like Uber and Lyft. 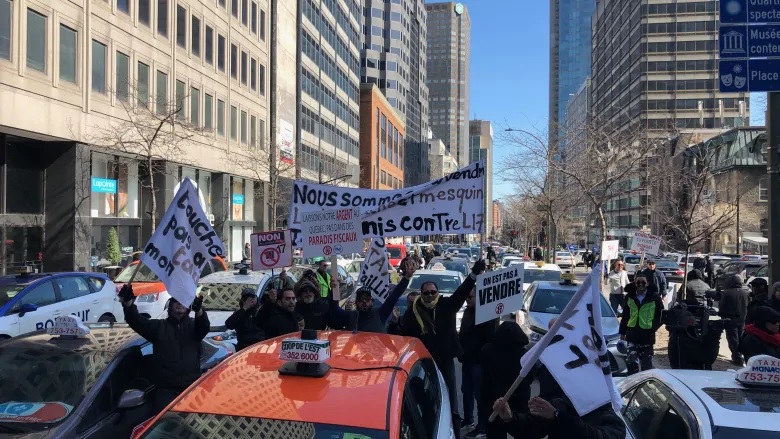 Quebec taxi drivers block downtown Montreal streets in April over deregulation plans. They say with the arrival or ride hailing services like Uber and Lyft, their permits which had cost up to $200,000 are worth little and government compensation is not enough. (Vincent Resseguier-Radio-Canada)

The government plan, proposed in Bill 17 would eliminate permits, and adopt a standard set of requirements such as a standard class-5 driving licence instead of the special taxi class 4-C, and move from the current fixed rate system to variable pricing based on demand like Uber does, and the end of territorial limits.

Drivers and owners say the value of their taxi permits has dropped drastically in recent years. The government has offered compensation to the permit holders and drivers of $814 million, but as some permits had cost up to $200,000, many say that’s not nearly enough.

“The public shouldn’t have to pay, they never asked for deregulation. Uber should be the one paying” Hassan Katoua- taxi spokesman

Serge Lebreux, spokesman for the Association of Taxis of Quebec Region says they need at least $1.3 million for buyback of permits and added that the Quebec Transport minister Francois Bonnardel has been insensitive to their concerns. Quoted in the Canadian Press, Lebreux says the minister is unwilling to “move a comma” and “listen to reason even when it comes to the aspect of safety”.

The rotating morning strikes this week are just the latest in long series of taxi protests against Quebec’s deregulation plans for the industry.