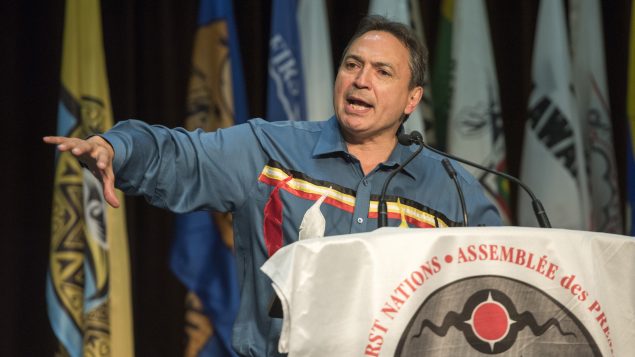 Speaking at a press conference in Ottawa Monday, Bellegarde unveiled a document, titled Honouring Promises: 2019 Federal Election Priorities for First Nations and Canada, that seeks to set Indigenous priorities for parties and candidates in the Oct. 21 election.

“This country was founded on promises between First Nations and the newcomers to share the land and work together in the spirit of partnership and mutual respect,” Bellegarde said in a statement.

“First Nations want federal parties to commit to the promises we are setting out today so we can move forward together.”

Bellegarde said whoever comes to power following the election must maintain the momentum set by the governing Liberal Party of Prime Minister Justin Trudeau.

The 16-page document outlines a wide range of commitments that the AFN seeks from federal political parties with specific time frames attached to each policy commitment.

“First Nations youth need equal opportunity to excel in math, science, history, the arts and skills and trades,” Bellegarde said. “And they must be inspired to have the opportunity to speak their languages, live their cultures and attend their ceremonies.”

While acknowledging the progress made under the Liberal government, Bellegarde refused to endorse any party or leader, arguing instead that the AFN is looking to influence all party platforms.