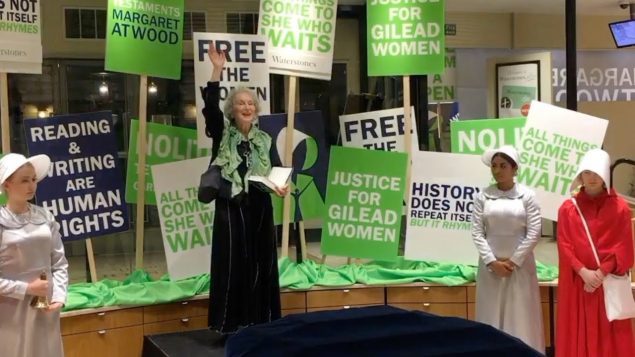 Now THIS is a launch..

London, England: hundreds are lining up waiting for your latest work.

The your in this case is Margaret Atwood.

She is, after all, Canada’s most famous novelist, albeit perhaps not the most acclaimed.

It was Alice Munro not Atwood, who was awarded the Nobel Prize in 2013.

Still there was Atwood Monday night as midnight approached reading from her new novel, The Testaments, which is being billed as the highly anticipated sequel to the The Handmaid’s Tale, which began life as a novel in 1985 and wound up as a world-wide phenomenon when it became a television series in 2017.

The Handmaid’s Tale tells the story of women forced into sexual slavery by the theocratic state of Gilead.

For years, Atwood said she was not interested in writing a sequel.

Then, “history changed,” she told the CBC’s The Current.

The Testaments is set 15 years after the events of The Handmaid’s Tale and tells the story about women forced into sexual slavery by the theocratic state of Gilead.

It is told by three narrators connected to Offred, the narrator of The Handmaid’s Tale.

The Testaments is already in the running for both the U.K.’s Man Booker Prize and Canada’s Scotiabank Giller Prize.

Atwood is scheduled to begin a world-tour this month promoting the novel.