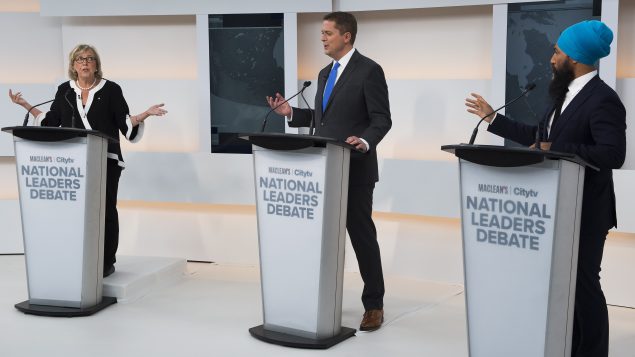 A strategic move by Liberal Leader Justin Trudeau to skip the first debate of the election campaign drew fire from his opponents, who accused him Thursday of being afraid to defend what they described as his abysmal record.

“I think I’ve found some consensus. I think we can all agree that Justin Trudeau is afraid of his record and that’s why he’s not here tonight. He has made life more expensive and mismanaged the economy,” said Scheer.

While Scheer predictably kept his sights zeroed in on Trudeau, some of the sharpest exchanges of the evening were between Singh and May, who are both competing for the left-of-centre votes and are neck-in-neck in most polls.

The party leaders sparred on a number of topics, including budget deficits, taxes, pharmacare, Indigenous issues and foreign policy. 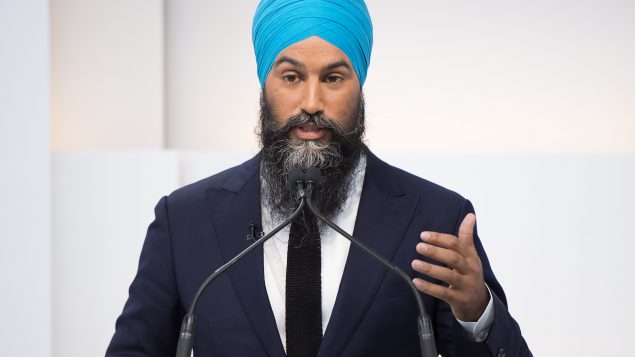 The party leaders were asked by debate moderator, Maclean’s columnist Paul Wells, how they would deal with China. Ottawa and Beijing are in the midst of a deep diplomatic row over Canada’s arrest upon U.S. request of a top Chinese telecom executive and China’s arrest of two Canadians.

Singh said he would abandon hope of a free trade deal with China and focus on fair trade that ensures Chinese workers and standards are on a par with Canada.

May said Canada’s relationship with China is imperilled by “some rather large forces that are outside of our control.”

She said Canada is caught between a geopolitical and trade fight between two superpowers with U.S. President Donald Trump “poking China with a stick.” 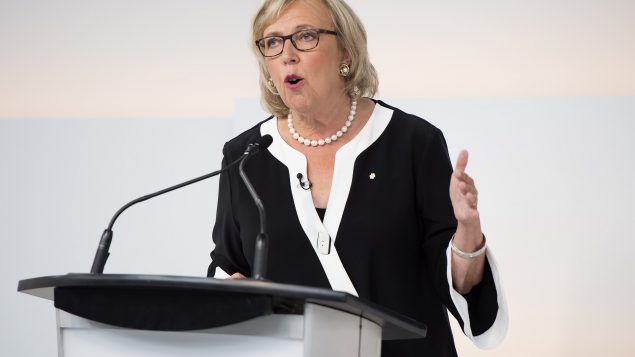 As much as she is concerned with China stopping imports of Canadian canola and pork, the federal government’s the No. 1 concern must be the safety of Canadians, she said.

“Michael Kovrig and Michael Spavor should be our concern right now,” May said referring to the two Canadians detained by China. “Not trade, not anything else.”

Scheer agreed with May that Kovrig and Spavor, who have been accused of spying by China and have been in Chinese custody since December, should be a top priority.

He also said there are ways the Canadian government could express its displeasure with China, including withdrawal of Canadian funding from the Asian Infrastructure Investment Bank.

Scheer dodged several questions from Wells about whether he still supports Brexit.

Dealing with Russia and the U.S. 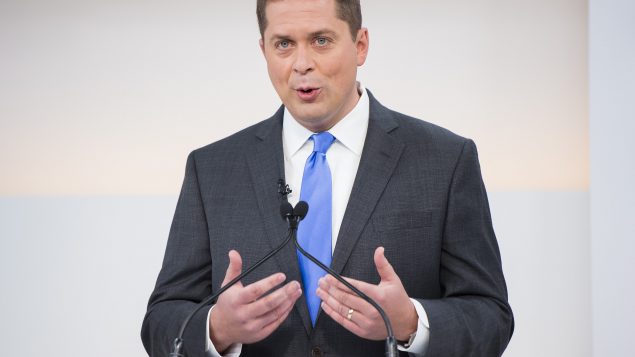 The discussion then shifted to relations with Russia and Ukraine. Scheer said he was proud to be banned from entering Russia and would, as prime minister, continue to stand up for Ukraine against Russian aggression.

May reminded the leaders that Chrystia Freeland, the Liberal foreign affairs minister, is also banned from the country. She said Scheer’s foreign policy positions mimic those of Trump.

“I looked at your policies on foreign policy today, Andrew, and I realized if anyone wants to know where you stand, just figure out what Trump wants,” she said.

“You will do what Trump wants. He might as well be the ventriloquist and you are Charlie McCarthy,” May added, referring to the doll character in a popular act by American actor, comedian and radio performer Edgar John Bergen.

Scheer dismissed the accusation as false and said that while Canada has to increase funding to its military, he is fully committed to NATO.