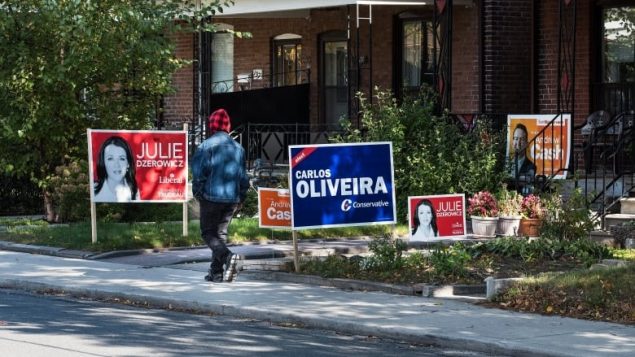 Various party election signs in Toronto in the 2015 election. So far, a few candidates from the various parties have either been removed or have pulled out over a variety of alleged or perceived indiscretions. (Aaron Vincent Elkaim-CP)

In recent years, several political hopefuls have had their plans cut short, often due to old social media posts. These often espouse positions or opinions expressed as private citizens, but which are deemed as being racist, sexist, politically extreme, or other views no longer acceptable in today’s world.

Political parties try to check their candidates for suitability, but sometimes, the opposition finds things, the candidates party does not.

So far in Canada’s election, there have already been a handful of cases where candidates have had to withdraw.

Peter Graef is a professor of political science at McMaster University in Hamilton, Ontario

The problem for a political party, especially during an election campaign, is that the party message, their platform and proposals get derailed by the  “scandal” of an improper social media post, or having associated with someone generally deemed socially unacceptable, such as a former criminal or having extreme views.

In this first week, there have been candidates kicked out, or who have withdrawn for a variety of reasons in order to avoid alleged disruption to the party. In other cases some candidate’s old postings, associations, or statements have resulted in harsh questions directed at the party leaders from the press and from the public during speeches.

Professor Graef notes that with several hundred candidates for each party, the internal investigation- vetting- of a candidates is a long and complicated process, especially if the candidate forgets or deliberately avoids revealing all social media accounts and past associations, and opinions.

Graef points out that each party also has another group who’s job it is to seek out such things to be used against their rivals.

He says out that political parties spend an enormous amount of money for each day of campaigning, and it becomes a wasted effort if the focus of an event is not on the party platform but rather some apparent or alleged unacceptable action from a candidate.

Replacing a candidate at a last minute can also be disrupting and even possibly weakening the chances for the party in a particular riding.

In Canada, the second week of intense campaigning has just begun leading up to the vote on October 21.