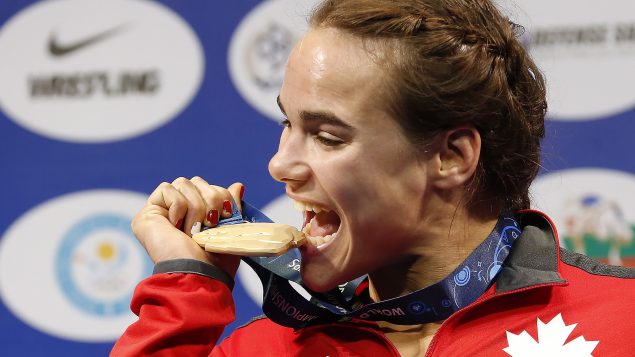 Canadian athlete Linda Morais won gold in the under 59 kg category at the World Wrestling Championships in Nur-Sultan, Kazakhstan.

The 26-year-old Ontario athlete, from Tecumseh, defeated Russian Liubov Ovcharova in the final.

But it wasn’t easy for her. After 6 minutes, the Russian already had a 6-1 advantage.

Nevertheless, some words of encouragement from Morais’ corner helped her reset on the way to winning the match.

Her coach, David Zilberman, shouted out that it was OK and there was plenty of time left.

“That really calmed me down,” Morais said to CBC. “I took a breath. There was six minutes in the match. I still had a lot of time. So I was staying focused on that. Just one point at a time.”

The two-time world university champion picked the right moment to be aggressive, fighting back to get the pin and the 59-kilogram title.

Mongolian Shoovdor Baatarjav and Chinese Pei Xingru each completed the podium with a bronze medal.

Bronze medallist at these same World Championships in 2016, she became the 12th Canadian wrestler to be crowned with a world title.

It’s given me confidence for sure leading up to [Tokyo in] 2020,” she said. “You never really know if you’re at this level until you reach it. I’m just going to feed off this win and go into those Olympic trials and have more confidence in myself and my abilities.Linda Morais

However, the 59-kg division is not an Olympic class but Morais has competed at 62 kg, an Olympic division, in the past. She could move up in weight for the Olympic trials in December.

Her win earned her a spot in the final of the Canadian Olympic selections to be held in Niagara Falls from December 6 to 8.

However, if she wins in the 62 kg division, Morais will still have to rank among the top two wrestlers at the Pan American Olympic qualifiers in Ottawa next March in order to earn a spot for the upcoming Olympic Games.