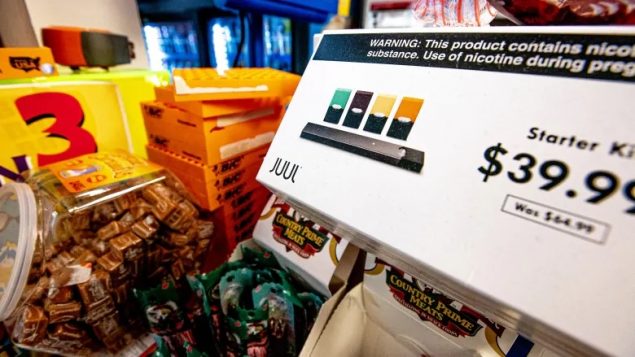 August 2019: E-cigarette advertising hangs above candy at a convenience store in Toronto. Many health experts are concerned about marketing of e-cigarettes seemingly aimed at youths, including "fruity flavours" and colourful advertisements and are seeking tighter restrictions on sales and marketing. JUUL has voluntarily halted advertising in the U.S, but continues in Canada (Craig Chivers/CBC)

E-cigarettes: JUUL ends advertising in U.S, but not Canada

With seven deaths and hundreds of lung illnesses in the U.S, related to vaping, regulators there are taking actions to halt or severely limit vaping product sales .

U.S President Trump this month suggested controls should be enacted around vaping products especially flavoured products which attract young people. This week Massachusetts banned the sale of vaping products, California is poised to be next, while New York and Michigan are moving in that direction as well.

San-Francisco based JUUL, controls about 70 per cent of the vaping market announced a self-imposed halt to advertising of its products in the U.S.  Federal prosecutors are also investigating the company to determine if laws about marketing products to teenagers under 18. 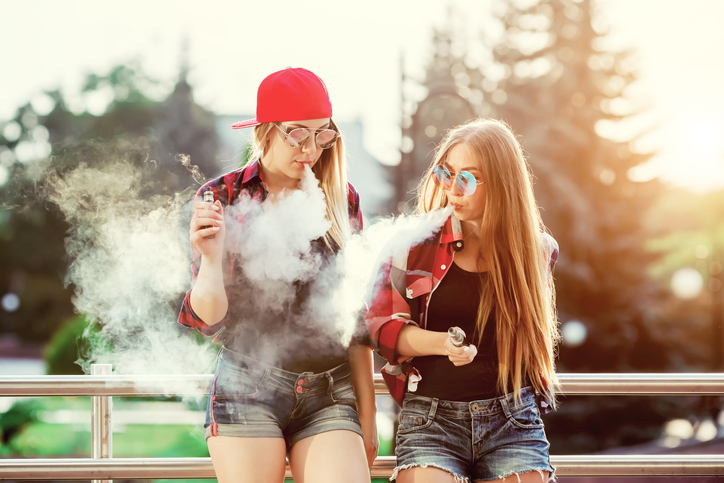 The move by JUUL to halt advertising in the U.S. is seen by analysts as a measure to avoid even tougher restrictions on its products

However, JUUL has made no such move in Canada, where fruity flavoured nicotine pods and e-cigarette sales continue along with the advertising campaigns. A statement to The Canadian Press, said that JUUL is a “global company” and the decision to halt print, digital, and broadcast advertising concerns only the U.S.

Canada does have federal rules preventing marketing of the products that appeals to minors, or promotes a certain lifestyle. Provinces also have their own variety of restrictions. However, the products and colourful adverts still seem to be highly visible in convenience stores and specialty vaping outlets. 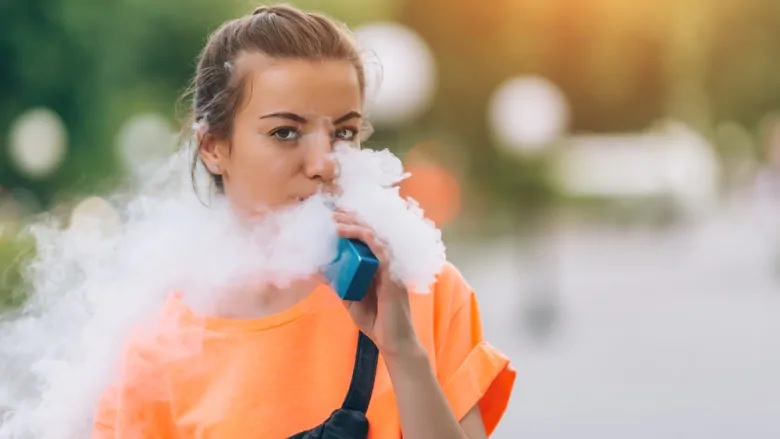 Originally marketed as a less harmful alternative to tobacco, or as a way to wean smokers from tobacco, vaping has become extremely popular among youth attracted by fruity flavous to mask the nicotine (Aliaksandr Barouski/Shutterstock)

Last year, facing criticism, JUUL stopped marketing the flavours mango, fruit, and cucumber in the U.S, but they continue to be available in Canada. In response to questions by The Canadian Press about the difference in marketing practice, JUUL said only that Canada and the U.S. markets “are very different”.

In response to questions from the CBC, a JUUL spokesperson says the company respects all Canadian rules adding, “Juul Labs Canada never has and never will market to young people. We have never engaged in lifestyle marketing, which is already banned in Canada, and have voluntarily committed to never engage in social media advertising in Canada”.

Quoted by CBC, Montreal paediatrician Dr. Nicholas Chadi said, “”They come in all sorts of cool flavours and shapes, and they’re high tech and you can charge them in any USB port so just the device itself is attractive to a young person, and they are discreet. They are fairly affordable.”

So far there has been only one case of the vaping-related mysterious lung disease in Canada, and Health officials here say they are monitoring the situation in the U.S. and are in contact with health authorities there.

Since the introduction of vaping as a safer, healthier option to help wean smokers off tobacco, the practice has skyrocketed among youth.