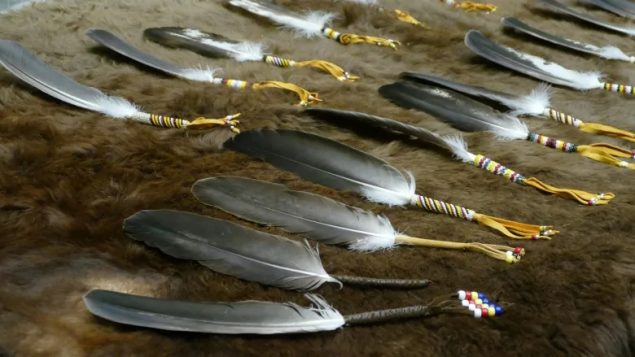 The eagle feathers, which are considered sacred by First Nations people, are laid out during a presentation at the Law Courts building in Winnipeg. An eagle feather will now grace every courtroom in Manitoba. (Lyzaville Sale/CBC)

Indigenous elders, pipe carriers, warriors as well as provincial judges and officials blessed forty-five eagle feathers as the sun was rising over Winnipeg on Thursday

They were participating in a smudging ceremony marking the gift of the feathers to the Manitoba provincial court system.

From now on, feathers will be in every courtroom in the province. 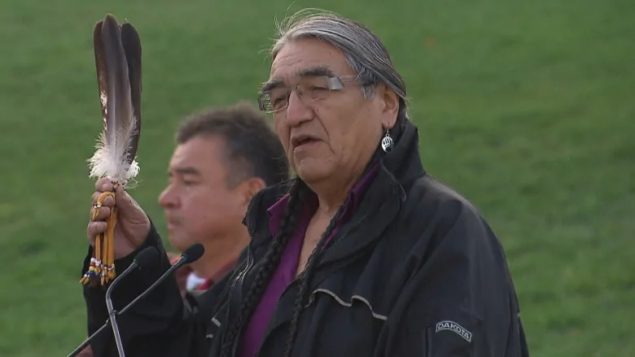 Indigenous elder Ed Azure speaks of the importance of incorporating eagle feathers when oaths are affirmed in Manitoba’s court system at the sunrise ceremony in Winnipeg. Michael Pierre stands with him. (John Einarson/CBC)

That means Indigenous people can give testimony by holding an eagle feather, rather than swearing on the Bible or simply stating their promise to tell the truth in court.

A formal presentation of the feathers attended by the nine Supreme Court justices as well as every sitting judge in Winnipeg took place Thursday afternoon.

The eagle is considered a sacred and wise by First Nations.

“This is a historical moment for us, to see our way of life being accepted into the courts like this,” said Michael Pierre, who works with Indigenous spiritual care givers at the Manitoba Department of Justice, told the morning gathering.

Pierre said the eagle reminds Indigenous people to love all creation, and the feather shows the path they should walk. 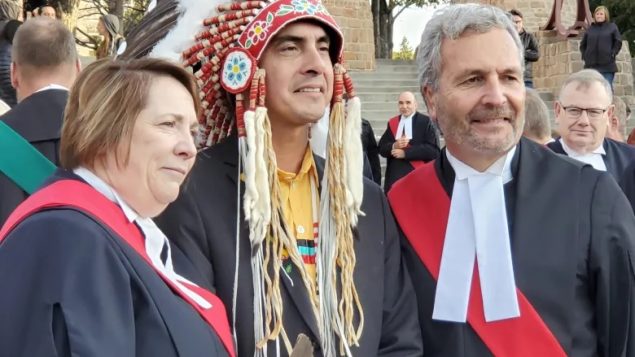 “The presence of the eagle feather in the courtroom, and at the court counter, will provide Indigenous and Aboriginal Manitobans with confidence that they will be heard and that they deserve to have their culture and beliefs recognized, respected and accepted with renewal,” Joyal said.