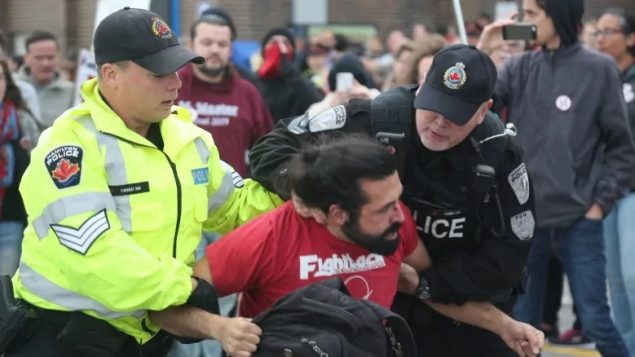 Four people were arrested outside an event featuring Maxime Bernier in Hamilton Sunday. The four were later released unconditionally, according to Hamilton Police. (Justin Mowat/CBC)

Scuffles broke out at Maxime Bernier event in Hamilton

A protest outside an event by People’s Party of Canada Leader Maxime Bernier in Hamilton, Ontario, turned violent Sunday evening as demonstrators attempted to block supporters of the newly created right-wing party from attending a panel discussion with American YouTuber and political commentator Dave Rubin.

Hamilton Police said they arrested four people “for breach of the peace” after a fight broke out near the entrance of a hall at Hamilton’s Mohawk College before the discussion was set to begin on Sunday evening.

“Event attendees were met by a large group of approximately 100 protesters as they entered the building,” said a statement by the police. “Hamilton Police and Mohawk College Security Services were on-site to ensure community safety and well-being for protesters and attendees.”

The arrested parties were removed from the scene and later released unconditionally, the statement added.

There were no reported injuries.

The college auditorium was filled to capacity as hundreds of people showed up to listen to a panel discussion of the issue of free speech.https://www.rcinet.ca/en/2019/09/30/scuffles-break-out-at-maxime-bernier-event-in-hamilton/?preview=true

A full house and huge support for @MaximeBernier and @RubinReport . Hamilton event ended just now. No one wants to leave. Had fun being part of the discussion… and laughs. pic.twitter.com/pd1eLaH4Px

However, the school has faced criticism for allowing Bernier to rent the facility, with some accusing the institution of providing a platform for hate speech.

Mohawk College’s president has said the school is bound by a “government-mandated freedom of speech policy” that requires it to provide opportunities for anyone to voice their views.

Bernier, a former Conservative cabinet minister in the government of Stephen Harper, launched the new party last September after a public falling out with his Conservative Party leadership rival Andrew Scheer.

The PPC also rejects the scientific consensus that human activity is the principal cause of global warming. Its platform promises to withdraw from the Paris climate accord, scrap any price on carbon and withdraw subsidies for green technology.