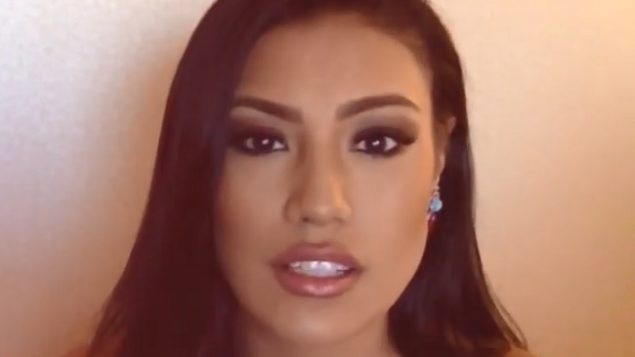 Actress and Miss Universe Ashley Callingbull is one of the celebrities making a video appeal to boost voter participation. (VoteParty.ca)

Several celebrities are exhorting Canadians to make a vote date to encourage non-voters to cast their ballots. It’s a unique initiative launched by the non-profit VoteParty.ca.

The message is in a series of videos that will be shown in Cineplex movie theatres across the country between October 4 and 17, 2019. They target a potential 1.5 million viewers, particularly the young who are less likely to vote.

“The hope is that you’ll have three people, young people watching a movie and one of them is a voter and they turn to the other two and say ‘do you vote’ and they say ‘no’ and (the voter says) ‘okay, I’ll help you. Let’s go on a vote date.’ So that’s the idea, is to provoke this conversation of people asking each other whether they vote and when a voter finds a non-voter, helping them vote,” says Duff Conacher, co-founder of Democracy Education Network and co-ordinator of VoteParty.ca. 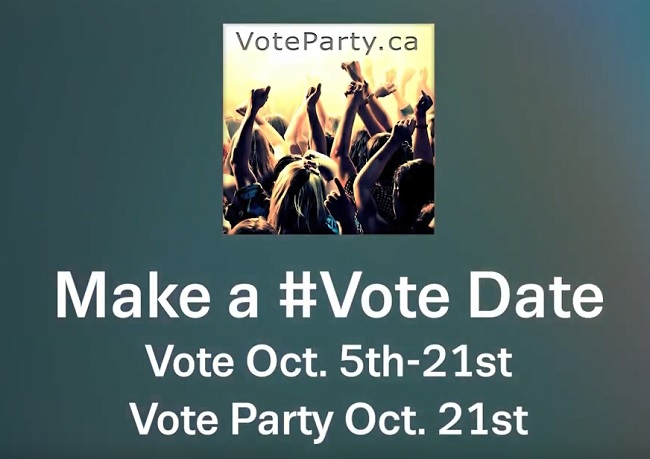 The video exhorts moviegoers to make a date to help non-voters cast a ballot. (VoteParty.ca)

Young less likely to vote for many reasons

The turnout for young voters was seven per cent but went up to 12 per cent in the 2015 federal election which was won by Justin Trudeau and the Liberals. VoteParty.ca takes some of the credit having run a campaign to boost turnout then.

That youth turnout was still lower than the 68 per cent general turnout. “Really it’s just because they (young voters) don’t have experience paying taxes, they don’t have kids in school, they don’t really realize how many different things that governments decide that determine how you live your life,” says Conacher. “Once they realize that as they get older they start to vote more.”

General voter turnout is still lower than the 75 to 80 per cent that it was 25 years ago. Conacher says there may be several reasons. Sometimes people live in a riding with one strong candidate and they feel their own vote will not make a difference. But he notes that in the 2011 election, nine politicians won by fewer than 500 votes and another 19 candidates only won by 500-1,000 votes. “And a lot of those were surprises because swings happen,” he says.

For those who say their votes have not made a difference in the past, Conacher counters, “If you don’t show up and vote, politicians really don’t care about your concerns because that’s how they get their jobs or lose their jobs. They care much more about voters than people who don’t vote.”

Duff Conacher talks about the national campaign to get more people, especially the young to vote.

Duff Conacher talks about the national campaign to get more people, especially the young to vote.