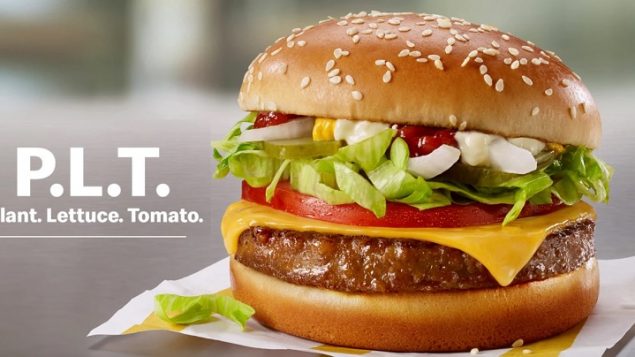 It looks like McDonald's famous meat-patty quarter pounder with cheese, but it's not. It's has a plant-based patty and the giant chain is doing a market test in Canada with this new product (McDonald's)

McDonald’s  with some 35,000 outlets around the world, has made a somewhat surprising announcement. Known as the world’s largest meat-based hamburger chain, they’ve joined the movement towards plant-based products with a plan to introduce its own “non-meat” burger in North America.

Also surprising is that the American-based chain with operations in 119 countries around the world has chosen Canada for the introduction in a pilot project.

McDonalds introduced its first non-meat burger years ago in North America but it wasn’t a success and was soon withdrawn.

It has however since then launched vegetarian and vegan burger/sandwich options in Europe.  It has offered a McVegan burger in Finland and Sweden for the past two years after partnering with the Norwegian special foods firm Orkla.  In April in Germany the chain began offering a vegan burger in partnership with Nestle which developed a plant based product after acquiring California’s Sweet Earth Foods.

Now, here in N. America, which is basically the home of meat “burgers”, and after a summer of promoting the virtues of its beef products, McDonalds will begin a pilot project with their PLT this week. With a play on their famous BLT burger (bacon, lettuce, tomato) the PLT stands for “plant, lettuce, tomato”.

The thought is that now, people generally have the impression that a plant-based food is both healthier and more environmentally friendly than meat.  Charlebois points out that neither of those beliefs have been proven, especially since the plant burgers require a lot of processing.

Introduced this week at 28 outlets in southern Ontario, it will sell at about the same price as one of their top meat burger products, the “quarter pounder”. By not lowering the price, the thought is they are testing the competitiveness of a plant burger against their popular meat burger.

The pilot also is in a region that includes both major urban, smaller urban and rural areas.

Charlebois notes that the McDonald’s plant burger is a Beyond Meat product the same company that supplies A&W restaurants.  He says if the McDonalds pilot is a success, it would be difficult for Beyond Meat to supply the potential demand.

The pilot will run until January after which the giant international food chain will analyse results.