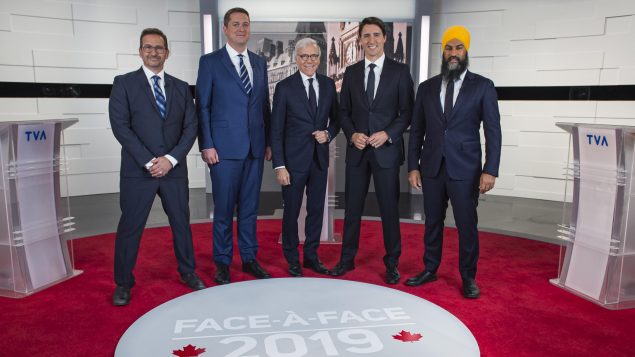 Four of the major party leaders squared off Wednesday night in a French-language debate that saw them clash over a wide range of topics from abortion rights, federal finances, climate change and the controversial Quebec secularism law among other things.

The debate, hosted by the private French-language TVA network and Le Journal de Montreal tabloid, was an opportunity for the four leaders to make their case to French-speaking voters in Quebec, particularly those living outside of the major metropolis of Montreal.

The organizers did not invite Green Party Leader Elizabeth May and head of the newly created People’s Party of Canada, Maxime Bernier.

This was Liberal Leader Justin Trudeau’s first debate and he wasted no time by trying to paint his main rival Conservative Leader Andrew Scheer, a devout Catholic, as a man out of step with Quebec’s current secular values.

From the get go, Scheer was pressed by his opponents – Bloc Québécois Leader Yves-François Blanchet, New Democratic Party Leader Jagmeet Singh and Trudeau – over his personal views on abortion and gay marriage.

Trudeau repeatedly asked the Conservative leader to state clearly what his personal feelings are on these social issues.

“Answer me this — do you believe women have the right to choose? Yes or no,” Trudeau said.

Scheer refused to be drawn into discussion of his personal faith.

“I have always been clear,” Scheer responded. “As a government, we will not reopen this debate.”

The leaders also discussed the controversial Quebec secularism law, known as Bill 21, that bans some public-sector employees such as judges, police officers and teachers from wearing religious symbols in the workplace.

Singh, who wears a turban as an expression of his Sikh faith, sought to counter any suggestion that his personal religion would get in the way of his strong support for secularism.

“I am for the separation between church and state,” said Singh, adding that he supports the rights to abortion, same-sex marriage and medical assistance in dying. “I will defend these rights with all my strength.”

Blanchet was alone in defending the Quebec law, although Trudeau is the only federal leader who has left the door open, however slightly, to challenging it.

This debate, which centred around issues important in Quebec, was the first involving the Bloc Quebecois leader.

Blanchet made an impassioned plea to Quebecers to send more separatist MPs to Ottawa to fight for the province’s interests, while Scheer urged voters not to “waste” their vote on a party that will never form government and instead elect Conservatives to allow them to form the next government.

Scheer was also forced to defend his position over the SNC-Lavalin scandal. The Conservatives have attacked Trudeau for allegedly trying to pressure his former attorney general and justice minister to interfere in the criminal case against the Montreal-based construction and engineering giant, which is facing corruption charges over its dealings in Libya.

Despite a scathing report by the independent ethics commissioner who concluded Trudeau had contravened the Conflict of Interest Act, the Liberal leader has maintained that his only motivation was to prevent job losses at the company.

Blanchet accused Scheer of wanting to “scrap” SNC-Lavalin, which had the Conservative leader on the defensive as he argued the Liberals were wrong in thinking the criminal proceedings threatened Canadian jobs.

The debate also became heated during a discussion about the fight against climate change, when the debate moderator, Pierre Bruneau, noted Trudeau had portrayed himself as a champion of the environment but then bought a pipeline.

Several columnists noted that Blanchet had the best performance of the evening.

But it’s unclear whether the victory in the debates will translate into more votes come election day on Oct. 21.

The next debate – this time in English – is slated for Monday Oct. 7. Radio Canada International will be lifestreaming the debate.