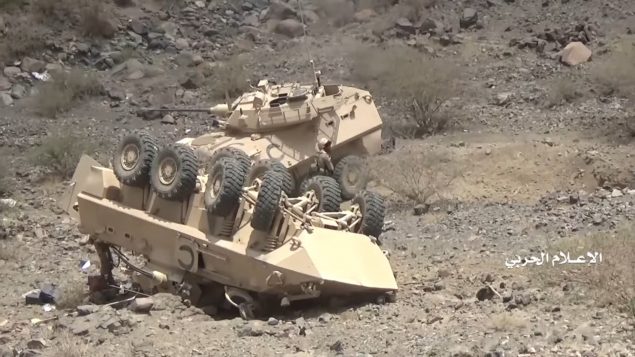 An image grab from a video released by the Houthi movement allegedly shows two Saudi light armoured vehicles (LAVs) destroyed by the rebels in an August offensive in the Kitaf district in northern Yemen. Radio Canada International could not independently confirm the location of the photo, but experts consulted by RCI identified the vehicles as LAVs produced by General Dynamics Land Systems – Canada at their plant in southern Ontario. (Houthi Military Media/Handout)

Images of what appear to be Canadian-made light armoured vehicles (LAV) captured or destroyed by Houthi rebels during recent fighting in the borderlands between Yemen and Saudi Arabia are triggering fresh calls for Ottawa to cancel its multibillion arms deal with Riyadh.

Critics of the $15-billion deal to supply Saudi Arabia with the latest model of LAVs say, if proven authentic, these images not only show once again that Canadian arms are being used by the Saudi forces in the bloody conflict in Yemen, but also illustrate the danger of them being diverted to other groups and militias, contravening Ottawa’s obligations under the UN Arms Trade Treaty.

Video footage and still images released by the Houthis on Sunday appear to show at least five damaged or destroyed LAVs of various models produced by General Dynamics Land Systems – Canada (GDLS-C) in London, Ontario, along with other armoured vehicles and large quantities of light weapons and ammunition.

The materials released by the Iran-backed Houthi movement also show five damaged Spartan armoured personnel carriers produced by the Canadian-owned Streit Group, which is now based in the United Arab Emirates.

The Houthis claim the footage, an edited compilation of several videos, shows the results of a major 72-hour military offensive by their forces against the Saudi-led coalition. 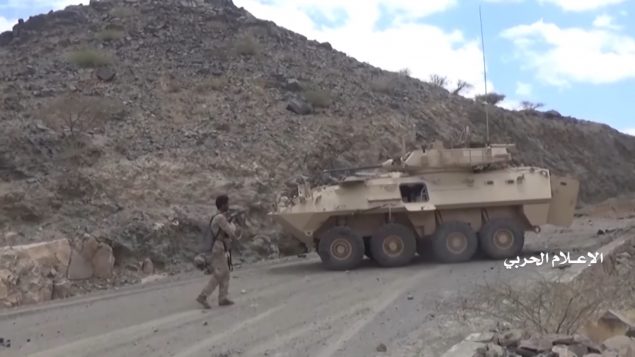 A Houthi fighter is seen near a Canadian-made LAV captured from Saudi forces in Kitaf, northern Yemen, in August. (Houthi Military Media/Handout)

Brig.-Gen. Yahya Saree, a Houthi military spokesman, told the Al Masirah TV that the operation began in August with an ambush on the Yemeni side of the border and developed into a full-blown cross-border attack into Saudi Arabia’s southeastern Najran province.

Saree claimed the rebels inflicted hundreds of casualties on the Saudi-led forces and captured thousands of prisoners, including “large numbers of commanders, officers and soldiers of the Saudi army.”

There were also large numbers of prisoners who were not Saudi nationals, he told the Houthi-run Al Masirah TV. Footage released by the Houthis shows soldiers in Saudi military uniforms and fighters in civilian clothing dropping their weapons and raising their hands as they surrender.

Saudi Arabia has dismissed the Houthi claims that thousands of its troops have surrendered to the rebels as part of a “misleading media campaign.”

Col. Turki al-Malki, a spokesperson for the Saudi coalition, told reporters on Monday that in late August the coalition thwarted a Houthi attack in the Kitaf district of Saada province near the border with Saudi Arabia. 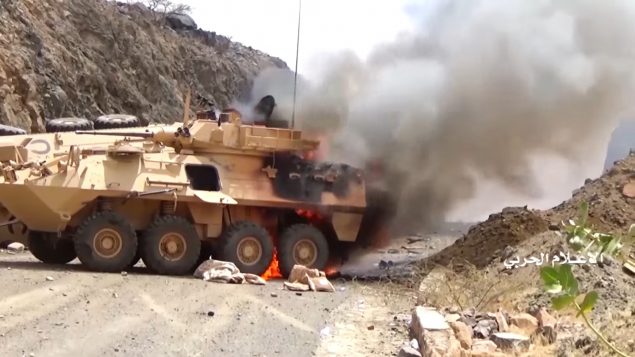 A Canadian-made LAV is seen burning in a still image released by the Houthi rebels in Yemen. (Houthi Military Media/Handout)

Doug Wilson-Hodge, a spokesman for General Dynamics Land Systems-Canada, told Radio Canada International the company is declining to comment on the footage.

However, experts consulted by Radio Canada International identified the vehicles in the still images and the video released by the Houthis as Canadian-produced LAV-25s and a Bison armoured personnel carrier, which is also based on the LAV-25 platform.

Four of the five LAVs were reported to have been captured or destroyed in Kitaf and the fifth one in the district of Wadi al-Faraa.

Radio Canada International could not independently confirm this information.

It’s also unclear whether the vehicles were operated by regular Saudi forces or whether they were transferred to pro-government Yemeni forces that fight against the Houthis as part of the Saudi-led coalition. 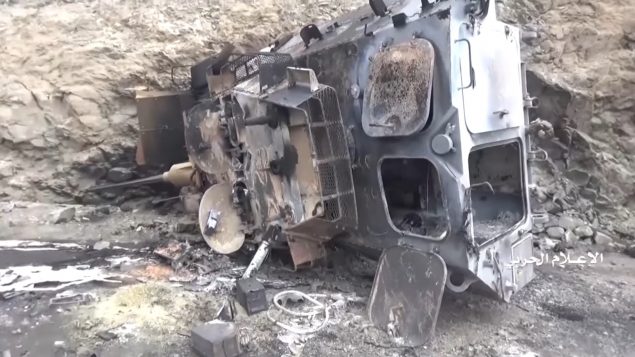 The burnt-out shell of a Canadian-made LAV is seen in this still image released by the Houthi movement. (Houthi Military Media/Handout)

Former Bloc Quebecois MP and University of Montreal law professor Daniel Turp, who in 2016 launched legal action to force Ottawa to cancel its export permit for the LAVs, said arms sales to Saudi Arabia are inconsistent with Canada’s legal obligations under the UN Arms Trade Treaty, especially given the evidence of their use by Saudi forces in Yemen.

Under Canada’s amended Export and Import Permits Act (EIPA), which came into force on Sept. 1, the minister of foreign affairs has to assess if the export of arms or defence technology would undermine peace and security, or could be used to commit or facilitate serious violation of international humanitarian or human rights law or be used against women and children.

Under Article 11 of the ATT, Canada is also obliged to take measures to prevent diversion of its arms exports to third parties, Turp said.

“It’s clear that there has been diversion given that these LAV-25s were captured by the Houthis,” Turp said.

Global Affairs Canada did not respond to Radio Canada International’s request for comment in time for publication.

However, Global Affairs officials have said in the past that they are reviewing export permits to Saudi Arabia and no final decision has been made. No new permits have been issued while this review is on-going, officials have said.

Turp was part of a group of civil society and human rights groups that called on Ottawa to halt arms exports to Saudi Arabia on Sept. 17, when Canada officially became part of the UN arms trade treaty.

Turp said he plans launch another legal challenge in the Federal Court next week to force Ottawa to cancel the export permits for the new LAVs and upgrades to the older models.

His previous attempts to have the Federal Court stop the export of LAVs were unsuccessful.

However, Turp said Canada’s accession to the ATT creates a new legal basis for his court challenge of the LAV sale to Saudi Arabia.

The images of Canadian LAVs captured by the Yemen rebels provide another argument for the challenge, demonstrating that arms sales to Saudi Arabia not only contravene Articles 6 and 7 of the treaty, but also Article 11, which deals with diversion of arms exports, Turp said. 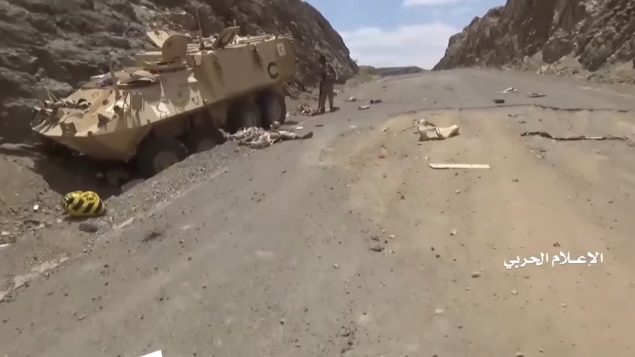 An image grab from a video released by the Houthi movement shows a Canadian-made LAV allegedly captured by Houthi fighters in the Kitaf district of northern Yemen in late August. (Houthi Military Media/Handout)

The Liberal government approved the controversial deal, signed by the previous Conservative government, to supply the Islamic Kingdom with hundreds of LAV 6.0 advanced combat vehicles in 2016.

According to a declassified 2016 memo prepared by Global Affairs Canada for then foreign affairs minister Stephane Dion and released by the government with several redactions following Turp’s legal challenge, GDLS-C had applied for six new permits worth about $11 billion dollars for the new LAV 6.0 variants, as well as upgrade kits for the older versions, such as the LAV-25s.

The number of new LAVs Saudi Arabia wants to purchase and their associated armaments are redacted out in the memo.

However, between 1993 and 2015, the federal government granted GDLS-C permits to export more than 2,900 LAVs and their associated weapons systems, including automatic canons, assault guns, mortars and anti-tank missiles, the memo said.

The memo also discussed the issue of Canadian equipment exported to Saudi Arabia falling into the hands of Houthi rebels following media reports of a rebel fighter who was photographed with a Canadian LRT-3 sniper rifle.

According to the memo, by 2016 more than 1,300 Canadian sniper rifles were exported to Saudi Arabia. The Canadian embassy in Riyadh concluded at the time that the rifle, along with other Saudi military equipment, was likely captured by Houthi fighters during military operations along the Saudi-Yemen border.

“This type of battlefield loss of equipment is to be expected as result of military operations,” the memo said.