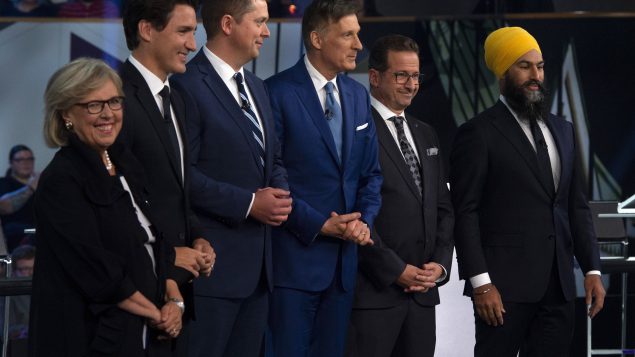 Canada’s six main federal party leaders clashed Monday evening in a two-hour English-language debate full of personal attacks, quips and brief moments of levity as they sought to shore up their positions and gain advantage over rivals ahead of the Oct. 21 national election.

The leaders answered questions and debated each other around five themes: leadership in Canada and on the world stage, Indigenous issues, affordability and economic insecurity, environment and energy, and polarization around human rights and immigration.

The themes were selected by a partnership of 10 news media organizations called the Canadian Debate Production Partnership, organized by the independent Leaders’ Debate Commission.

Trudeau whose party is seeking a second term in government was the target of most of the attacks of the evening. 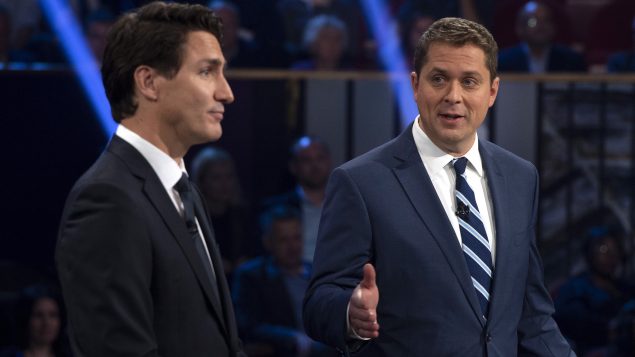 Scheer set the tone in the opening moments of rancorous debate, calling Trudeau a “phoney” and a “fraud,” who does not “deserve to govern this country.”

“Justin Trudeau only pretends to stand up for Canada. He’s very good at pretending things,” Scheer said, when asked to comment on the issues foreign policy and leadership on the world stage. “He can’t even remember how many times he put blackface on because the fact of the matter is he’s always wearing a mask.”

Blanchet, whose separatist party runs candidates only in Quebec, accused Trudeau of blundering into a full-scale diplomatic confrontation with China by acquiescing to a U.S. request to arrest top Huawei executive Meng Wanzhou.

“Showing leadership sometime means not making mistakes,” Blanchet said. “And arresting the chief financial officer of Huawei might have been a big mistake. When you’re facing a powerful foe like China, you don’t try to show biceps if you have only tiny biceps.” 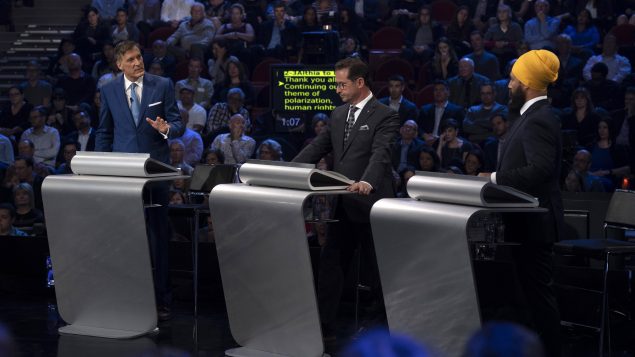 Lisa Laflamme, an anchor at the private CTV news channel and one of five moderators for the debate, continued by asking Bernier if he had the temperament for leadership, given his controversial comments on Twitter about climate change, immigration and his opponents.

Singh said the temperament for leadership requires a leader to look for things that unite Canadians, rather than divide them.

“That’s what a leader does and a leader works for the people who need help, not helping those at the very top which we’ve seen with governments in Ottawa for far too long,” Singh said.

May said leadership is about service and that anyone wanting to be prime minister has to view running the country as a service for Canadians.

All six leaders were also asked to respond to a question from the public about working with Canada’s provinces and territories if elected to government.

Bernier said he would respect Canada’s constitution and would not meddle in provincial and territorial jurisdictions such as education and healthcare.

Singh said healthcare was one of the biggest concerns of Canadian voters and his priority would be to set up a universal national pharmacare program.

Scheer said his party will work on breaking down interprovincial trade barriers and boosting trade within Canada.

May proposed creating a council of Canadian governments, a forum to bring all levels of governments to discuss and solve issues of mutual concern.

Trudeau said his government has signed historic health accords with provincial and territorial governments and consulted them when renegotiating the North American Free Trade Agreement with the Trump administration. 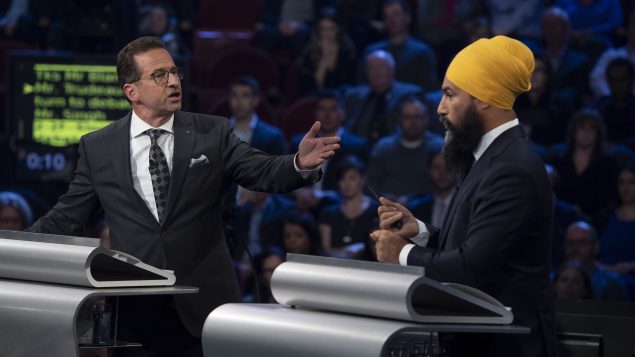 The second segment of the debate centred on polarization, human rights and immigration.

HuffPost Canada’s Althia Raj, asked Singh, an observant Sikh, whether he was showing a lack of courage by refusing to take a stand on Bill 21 in Quebec, which bans certain civil servants from wearing religious symbols at work.

“It’s probably pretty obvious to folks that I am obviously against Bill 21,” Singh said, pointing to his bright orange turban. “It is something that hurts me, it makes me feel sad.”

Singh said he hoped his personal example would show that the law was wrong but would not commit to challenging it on the federal level.

“Quebec does not need to be told what to do and not to do about its own values,” Blanchet said.

Trudeau used the occasion to attack Singh, saying that while he recognized the NDP leader had spoken eloquently on his experience with discrimination, he was disappointed Singh did not support a federal court challenge of Bill 21.

“Yes it’s awkward politically, because as Mr Blanchet says, it is very popular, but I am the only on this stage who has said, ‘Yes, a federal government might have to intervene on this,’” Trudeau said. 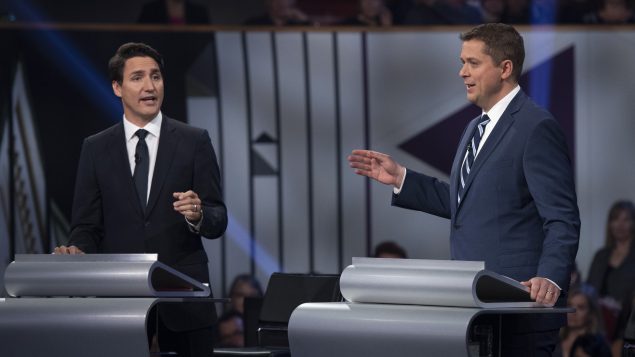 Scheer used the brief one-on-one debate to attack Trudeau on his handling of the SNC-Lavalin scandal. The Montreal-based engineering and construction giant is facing criminal charges over its dealings in Libya.

Scheer accused Trudeau of violating federal ethics rules by trying to pressure his former attorney general and justice minister to interfere in the case to help SNC-Lavalin avoid criminal prosecution.

Scheer in turn accused Trudeau of lying to Canadians. That left an opening for Blanchet, who accused Scheer of using SNC-Lavalin to further his politics, to the detriment of a major Quebec company that employs thousands of people.

“When Mr. Trudeau tried to find a solution, he did it the wrong way and he admitted it. What you are doing Mr Scheer … is you are trading the idea that Quebec is corrupt,” Blanchet said.  “Those 3,400 people [working for SNC-Lavalin] have done nothing wrong, now the value of the shares are going down, the employees are leaving, clients are leaving and we are losing it all because of you.”

Scheer said that regardless of the economic situation there was no excuse for a politician to interfere in a federal court case. “It is essential that we preserve the independence of our judicial system,” he said. 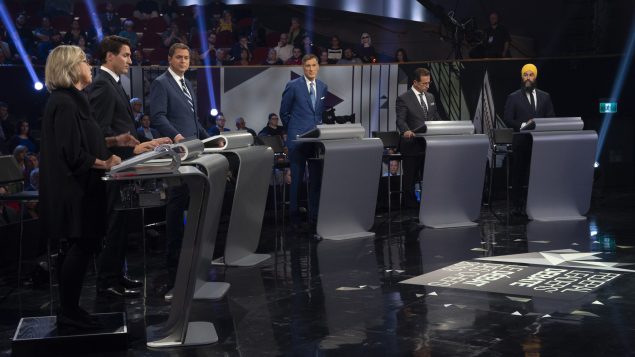 Consulting with Canada’s Indigenous peoples over major infrastructure projects was another big topic that elicited heated exchanges between the various leaders.

Scheer said he understood the importance of respecting treaty rights of Indigenous Canadians.

“But we have to remember that we have to get to a place in this country where big things can be built again,” Scheer said. “And duty to consult means that concerns are heard and addressed, but also that we find a path to letting things to be built in this country.”

Bernier said all the other leaders he is the only one ready to offer radical solutions to solve the problems facing Canada’s Indigenous peoples. He said he would look into implementing property rights on reserves.

May said Indigenous leaders are saying that the No. 1 issue facing their people is climate change and that is where the government has to act.

Trudeau said his government had moved forward on Indigenous issues in a way that other governments never did before, but there is still a great deal to do. He also said that children would be compensated when his government could ensure that it is done in the right way.

One of the most memorable zingers of the evening was delivered by Singh as he listened to Trudeau and Scheer talking over each other and arguing over the Liberal and Conservative climate action plans.

“I want to say this directly to Canadians,” Singh said. “You do not need to choose between Mr. Delay and Mr. Deny, there is another option.” 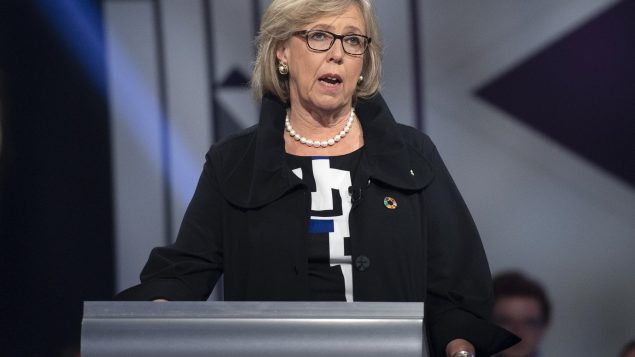 The final topic of the evening, moderated by the CBC’s Rosemary Barton, was the environment and energy.

A member of the public from New Brunswick said that Canada was in the midst of a climate crisis and that this was the last election Canadians had before we reached the tipping point. He wanted leaders to answer the question of what they would do in the climate fight.

Scheer used the opportunity to attack Trudeau for using two campaign planes and excusing that choice by purchasing carbon offsets. Trudeau replied that Scheer did not buy carbon offsets because he does not believe in climate change.

May attacked Trudeau for buying the Trans Mountain pipeline, arguing that the government’s emissions targets are guaranteed to miss the Paris targets. May went further, saying she hoped Trudeau did not get a majority because he would not make the necessary moves required to battle climate change.

Trudeau replied that Conservative politicians at the provincial level had been elected premier on the back of promises to eliminate the federal carbon tax and a strong government with a plan was needed in Ottawa to stand against them.