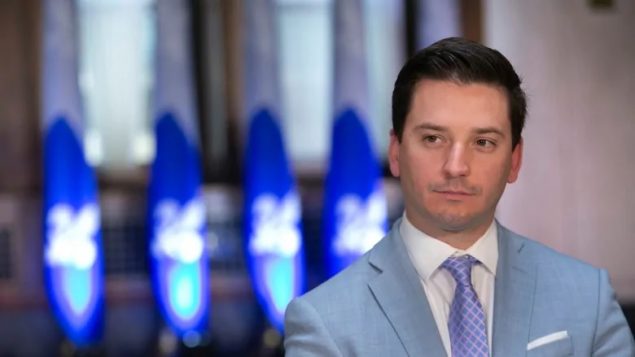 Immigration Minister Simon Jolin-Barrette was handed the French language portfolio a month ago. He was upset at use of the bilingual term (Ivanoh Demers/Radio-Canada

With a significant Anglophone population in and around the city, it is also a major tourist destination, where many visitors come from the U.S, elsewhere in Canada, and also from other countries where a second language known and used by citizens is often English.

Very often store staff and receptionists in the city and surrounding suburbs will greet a potential customer with the phrase, bonjour-hi, signifying that they are bilingual and can serve in either of Canada’s official languages. 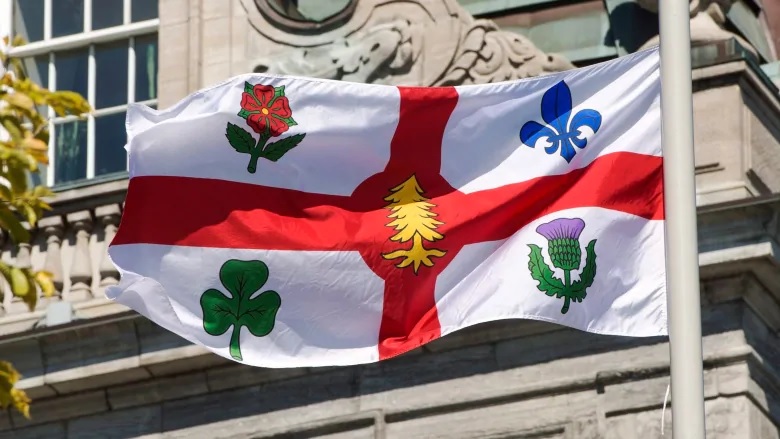 The flag for the city of Montreal features the founding people of the city, (clockwise from left) the English rose, the French lys, the Scottish thistle, and Irish shamrock.  In 2017 an Iroquois symbolic pine tree was added in the centre. (Ryan Remiorz-The Canadian Press)

The bilingual greeting has angered Quebec nationalists for years.

A month after taking on the role of protecting the French language, the Quebec provincial Immigration, Francization and Integration Minister, Simon Jolin-Barrette, had said earlier this month that he was considering a ban on the simple expression as part of a proposal to protect French which is the sole official language in the province.

It is not clear how such a ban would conflict with freedom of expression laws in the Canadian constitution.

A recent poll of Quebec Anglophones, Francophones and allophones (whose mother tongue is neither English or French) showed a clear majority (76.6%) believed Montreal to be a bilingual city.

After Friday’s comment about a possible legislated ban, on Monday the CAQ announced it would not be introducing such legislation but would use other measures to encourage use of “bonjour” only.

In 2017, the provincial legislature unanimously passed a motion to encourage use of “bonjour” as a greeting, but it was a non-binding motion.

In 2013, Quebec’s language concerns gained international ridicule over “pasta-gate”. This was when inspectors from the Office Quebecois de la Langue Francais (OQLF) but known colloquially as “the language police” tried to order a local Italian restaurant to use a French word instead of “pasta” and other Italian words on their menu.  Quebec nationalists also drew ridicule in 2008 for criticising a free concert by Paul McCartney during the 400th anniversary of the founding of Quebec City, as he would be singing in English, and again when they complained about English words on antique signs and posters in a Montreal restaurant (Joe Beef).

Meanwhile in Montreal a café owner, plans to open a second operation in the city and intends to call the café, “Bonjour-Hi”.