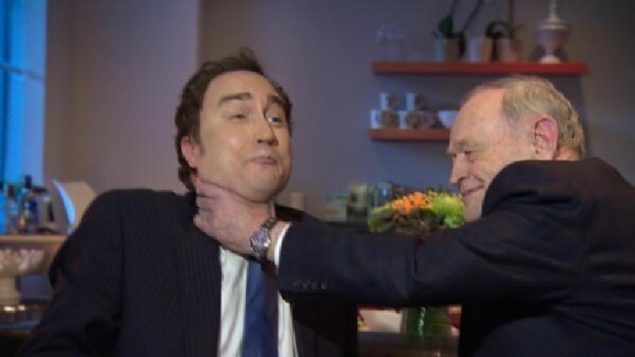 In 1996, then Prime Minister Jean Charest from Shawinigan Quebec, grabbed a noisy protester blocking his path, by the neck and shoved him aside. The "Shawinigan Handshake" became a long-standing on-camera joke between Cretien and Critch who says Cretien loved to play along (CBC)

A funnier side of politics

The show 22 Minutes is one of the best loved comedy shows on Canadian television.  A satirical look at society, celebrities, and of course politics and politicians it has been a Canadian hit for more than two decades..

Canada’s election coming in less than two weeks now features an unmatched six political parties vying for votes creating ample opportunities for gaffes, exaggerated statements, and confused leaders debated, and with now six leaders and parties to target, it’s been a field day for the show filled with opportunities for humorous takes on events and comments.

Mark Critch, one of Canada’s great humorists, is host of the show.

Humorist Mark Critch is host of 22 Minutes. long time hit comedy TV show. He talks about making fun of politics and politicians as Canada heads toward a national election.

From Justin Trudeau in blackface to Andrew Scheer’s  dual citizenship the election has been full of surprises…. It has also provided lots of fodder for comedy for the cast of 22 minutes. 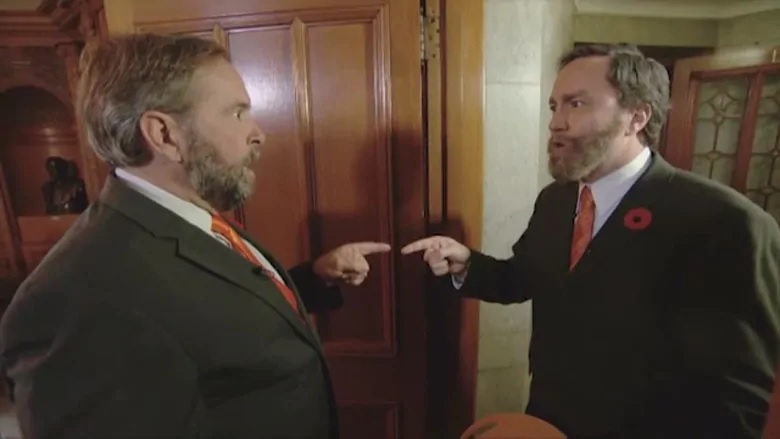 In 2014, a year before the 2015 general election, Critch caught the then leader of the New Democratic Party off guard with a bit of a joke on Thomas Mulcair’s beard, at the time, the only political leader sporting a beard in decades of Canadian politics (Critch is on the right) (CBC)

Over the almost three decades the show has been running, it has come to have a reputation where politicians expect someone from the show to turn up and “ambush” them, and have for the large part, become willing participants to be the butt of joking comments in the interviews.

Critch says the type of political interventions they do are probably unique to Canada and it likely has something to do with a somewhat unique Canadian sense of humour and fair play. While the politicians are the targets of jokes, it’s never done in a such as way as to inflict harm or derision, or to deliberately damage a politician’s reputation. 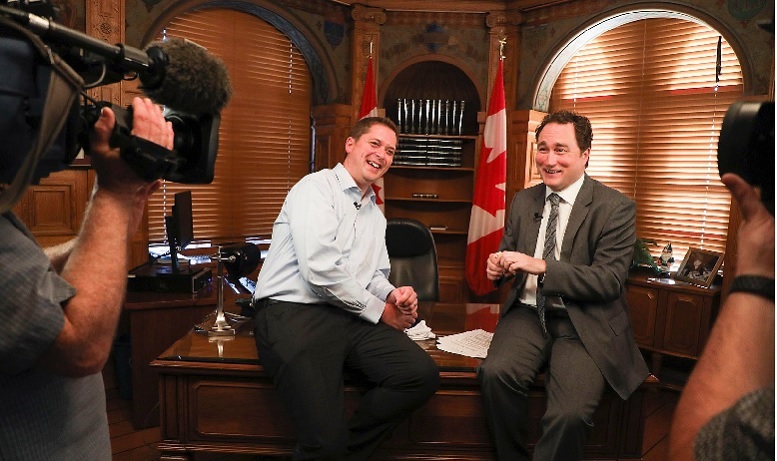 Mark Critch (R) with Conservative leader Andrew Scheer  (L) in his Parliamentary office in 2017. Some interviews are arranged, some are “ambushes”, but politicians are aware they’re always going to be made fun of. (wiki commons, 22 Minutes-CBC)