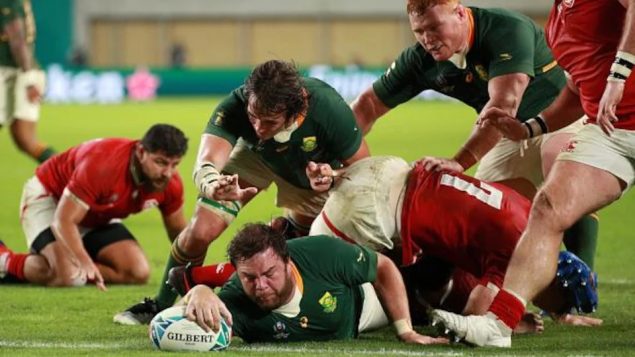 Springboks player Frans Malherbe makes the 10th try for S.Africa towards their humiliating defeat of Canada yesterday. Canada is now 0 for 3 with its last chance for a win this weekend against Namibia. (Adam Pretty-Getty Images via Radio Canada)

After just barely squeaking into the World Cup competition, Canada was placed in a group featuring a couple of the world’s best teams.

After an embarrassing loss to Italy (48-7) they were completely outclassed by champion New Zealand (63-0), and yesterday, equally clobbered by the South Africa Springboks, with a first half of 47-0, and a final score of 66-7. 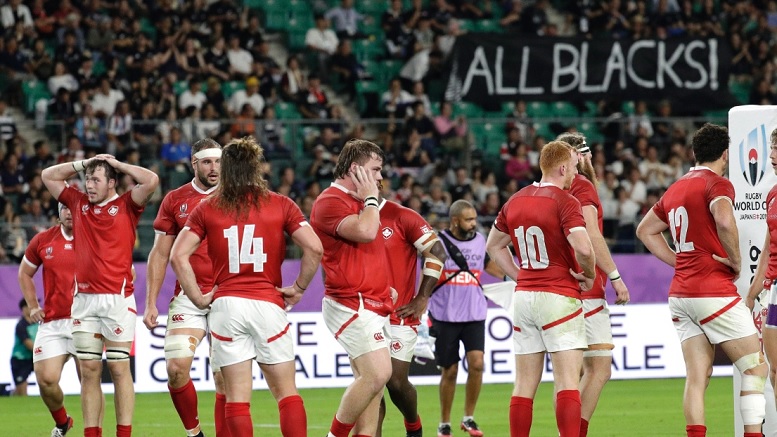 The Canadian team looking somewhat dejected after a crushing defeat at the ends of reigning champ New Zealand earlier this week. (The Canadian Press via RDS)

The Canadian team’s last chance in Japan comes this Saturday when they face Namibia, also winless so far and the only team ranked below Canada in the standings.

However, nature may interfere as a super typhoon is currently on track to hit Japan this weekend, and if that happens, there’s no knowing of what havoc and or damage may occur and how that may affect the World Cup.

Worth noting is the Canadian player who was red-carded, went to the Springoks dressing room to personally apologise to the South African player he hit, a move appreciated by the Springboks team.