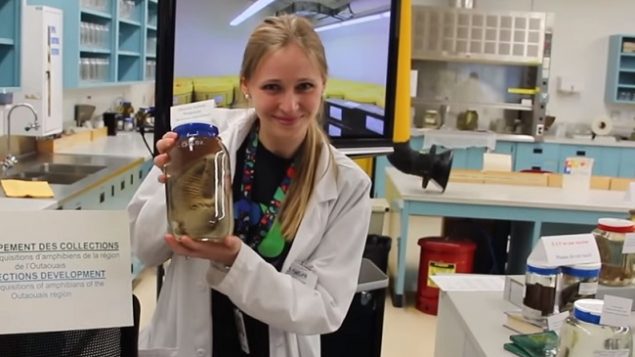 A museum collections manager shows off a specimen preserved in liquid. (video/Canadian Museum of Nature)

Museum of Nature invites the public to see hidden collections

On October 19, 2019 the Canadian Museum of Nature invites the public in to see specimens of plants, animals, fossils and minerals that it usually keeps behind closed doors. The open house will give people access to dinosaur bones and Ice Age animals, and scientists will be on hand to explain how fossils are prepared for study.

The Large Skeleton Room will be open to show a wall of antlers, whale bones, and skeletons of the larger animals. Small creatures including reptiles, amphibians and fish will be featured, some floating in preserving liquid, providing a complete 360-degree view. 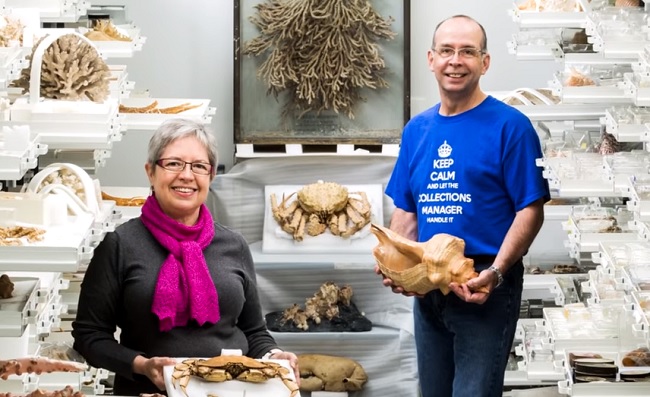 Visitors will be able to see lichen and shell collections. (video/Canadian Museum of Nature)

There are also many species of plants pressed and preserved including lichens, seaweed and mosses. Some species can remain dry for years and then come back to life.

Admission to the site in Gatineau, Quebec (near Ottawa) is free for the day.

A video of the last open house of this kind is in both of Canada’s official languages, English and French, and captures the enthusiasm of visitors and staff hosts.