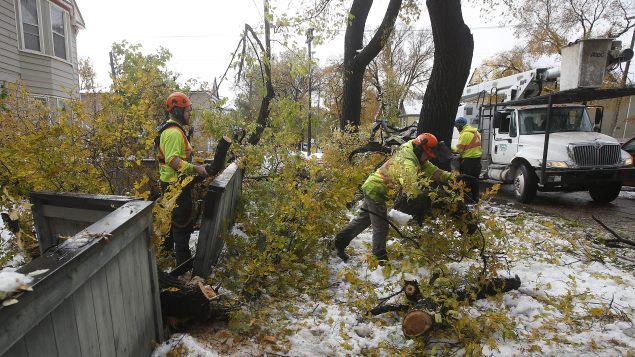 Crews cleanup after a snow storm which hit parts of Manitoba Thursday and Friday in Winnipeg on Sunday, Oct. 13, 2019. (John Woods/THE CANADIAN PRESS)

Manitobans face week-long delay to get power back after snowstorm

Manitobans dealing with the aftermath of an unprecedented snowstorm that knocked down power to the most densely populated southern half of the province last week will have to wait up to 10 days until power is fully restored, the provincial electrical utility announced Monday.

Crews have to replace multiple steel towers that simply folded under the weight of the wet snow, which also destroyed thousands of trees, bringing down electrical lines and snapping more than 2,000 wood transmission poles, said Jay Grewal, president and CEO of Manitoba Hydro.

“This is damage on a scale never before seen in Manitoba,” Grewal said Monday. “And it doesn’t account for the additional damage we are likely to find once repairs begin.”

Here’s a look at some of the conditions and significant damage our crews are facing as efforts continue across Manitoba. #mboutage #mbstorm pic.twitter.com/AKa48jLCrd

The utility’s construction staff estimate that they may find another 1,000 poles that are damaged and need replacement, Grewal said.

“So much of the damages in the hardest hit areas aren’t simple repairs,” added Grewal. “We are talking about having to rebuild miles of distribution lines, and rebuild sections of our transmission network, including enormous steel towers.”

About 20,000 homes and businesses in the province were without power Tuesday, including many customers in Portage la Prairie and a number of remote Indigenous communities, and approximately 800 in the provincial capital of Winnipeg.

#mboutage / #mbstorm update, Portage la Prairie: we’ve managed to restore 6 out of 8 feeders in the area, which should restore a large portion of the city. There’s still a lot of work to be done, and crews will be working into the night. We appreciate your patience. pic.twitter.com/bbz3DXZbIO

In Winnipeg, work to restore remaining customers in hardest hit areas has been slowed by the high number of fallen trees, Grewal said. Trees and large branches must be removed before assessment and repair can begin.

The provincial government declared a state of emergency on Sunday, allowing the utility for the first time in its history to ask neighbouring provinces and U.S. states for help.

“With the ground so wet from the rain and melting snow, we need specialized equipment in order to be able to access many areas where our lines are located,” said Grewal. “While Manitoba Hydro has a lot of this equipment already, the scale of damage means we need even more. And our neighbours have responded, for which we and our customers are extremely grateful.”

The province is getting help from neighbouring Saskatchewan and Ontario, as well as Minnesota, Grewal said.

While thousands of Manitobans are desperate to heat their homes, the electrical utility warned people to never use generators, patio heaters, barbecues and camp stoves indoors for fear of carbon monoxide poisoning.

Manitoba Hydro also reminded customers with portable generators to always run them outside, and plug their critical appliances directly in the generator using an extension cord to avoid electricity flow back to the grid, which could endanger crews working to restore power.