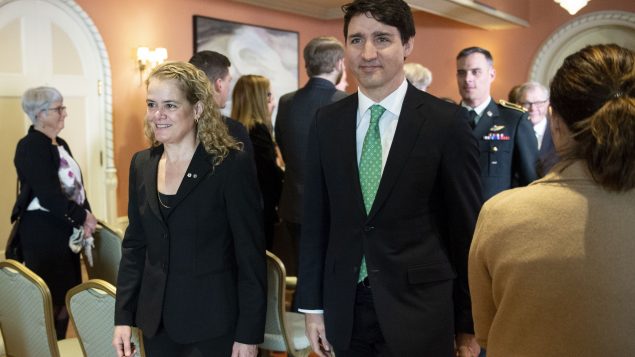 Trudeau met with Governor General to discuss next government

Prime Minister Justin Trudeau met with The Queen’s representative in Canada, Gov. Gen. Julie Payette, Tuesday to advise her that he intends to form government, even though his Liberal Party fell short of getting a parliamentary majority in last week’s federal election.

A spokesperson for the Prime Minister’s Office described the meeting in Ottawas as a private and short.

The Liberals won 157 seats in the House of Commons in the Oct. 21 election, falling well short of the 170 seats needed for a majority government. They will have to rely on support of other parties to stay in power.

Trudeau will also have to survive a vote of confidence on a speech from the throne laying out his agenda as prime minister.

He has said he’ll appoint his cabinet on Nov. 20, but it’s not yet clear when Parliament will reconvene.

Trudeau has said his priorities for the minority government’s first few months in office will be to bring in a tax cut “for the middle class”, to introduce legislation to expand medical assistance in dying, and to tackle climate change.

At the same time he has vowed to press ahead with the expansion of the controversial Trans Mountain Pipeline project, which is opposed by the NDP, the Greens and the Bloc Québécois, potentially forcing Trudeau to seek the support of the Conservative Party.

Meanwhile, some new MPs are gathering in Ottawa on Tuesday for orientation.

They’ll attend both personalized meeting and group workshops to learn more about the Parliamentary Precinct, human resources and staffing, financial resources and the digital infrastructure on the Hill.