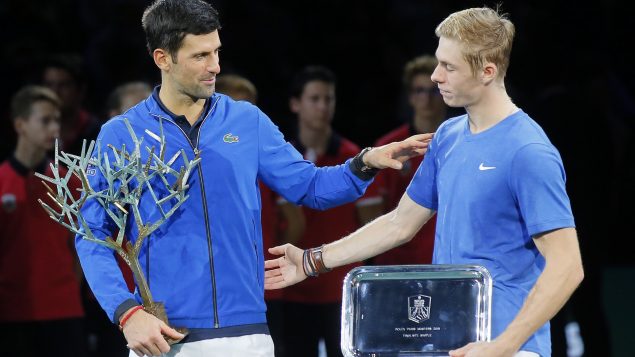 Novak Djokovic and Canada's Denis Shapovalov, right, stand together with their trophies after the final match of the Paris Masters tennis tournament in Paris on Sunday Djokovic defeated Shapovalov. 6-3/6-4. (AP Photo/Michel Euler)

It’s November, the clocks got turned back this weekend–time to accept that summer won’t be returning to these parts any time soon.

A perfect time, in other words, to take one last stab at a summer state of mind by talking a little tennis, the game of sun and sweat.

Indeed, Canadians–both fans and players–can look back at a whole year of terrific tennis. 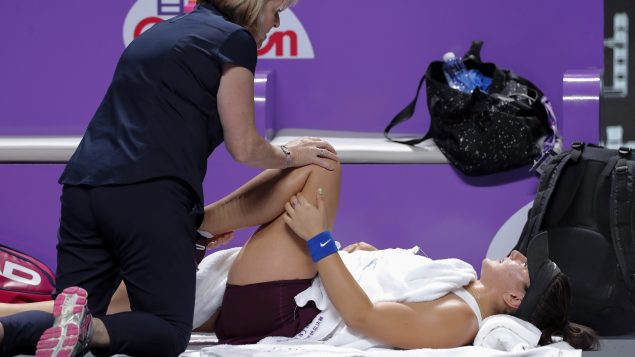 Bianca Andreescu receives a medical treatment on her leg after suffering a knee injury during the WTA Finals Tennis Tournament against Karolina Pliskova of the Czech Republic in Shenzhen, China last Wednesday. Andreescu later withdrew from the tournament, prompting concern from Canadian tennis fans that she might be injury prone, something that could hinder her budding career. (AP Photo/Andy Wong)

On the men’s side, a couple of young hot-shots, Denis Shapovalov and Felix Auger-Aliassime, tickled more than a few fancies as they vied to replace Milos Raonic as Canada’s top male player. 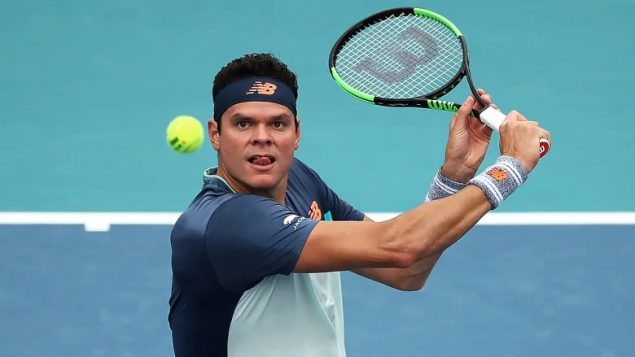 Milos Raonic struggled through another season of injuries and saw his ATP ranking fall to No. 32. (Julian Finney/Getty Images/File)

Shapovalov is now ranked No. 15 on the ATP computer, Auger-Aliassime is No. 21 as Raonic’s ranking fell to No. 32.

Shapovalov and Auger-Aliassime were scheduled to compete in the aptly-named Next Generation ATP Finals in Milan this week. 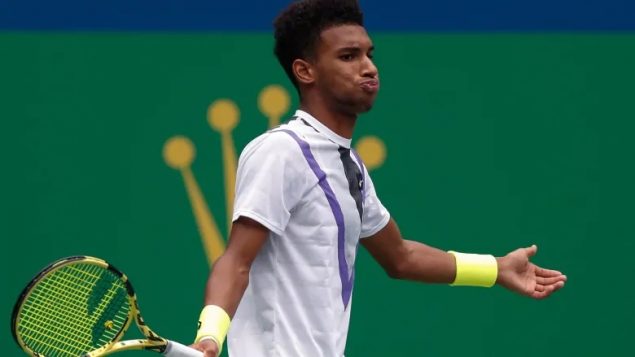 Montreal’s Felix Auger-Aliassime suffered an ankle injury in practice in Vienna last month and missed this week’s Next Generation ATP Finals in Milan. Auger-Alliassime finished the year ranked No. 21 in the world. (Associated Press)

Auger-Aliassime rolled an ankle in Vienna and Shapovalov begged off after a fierce end to his season that culminated with a loss in the Paris Masters final Sunday to Novak Djokovic.

Shapovalov’s success in Paris came as Andreescu was hobbling through (and finally withdrawing from) the WTA Finals Championships in Shenzhen, China.

For some perspective on the injuries, the successes and what they may mean, I spoke with Stephanie Myles, editor-in-chief of Tennis.life, who has a book about Andreescu coming out later this month,