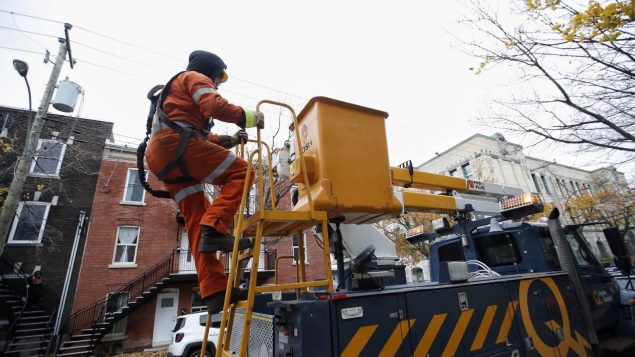 Hydro-Québec crews are working to restore power to nearly 61,000 customers who were still without electricity as of noon Monday (Ivanoh Demers/Radio-Canada)

Over 1,500 Hydro-Québec workers but also utility crews from Michigan, Ontario and the Maritimes were working feverishly on Monday to restore power to thousands of Quebecers who have been without electricity since Friday’s storm knocked out power to nearly one million homes and businesses.

“Given the considerable extent of the event, it is difficult for us to predict how long it will take for power to be restored,” the provincial power utility said in a statement, adding that teams will work “day and night” to restore service.

“In some sectors, these are complete sections of the network that are to be rebuilt. In other places, transformers and poles are changing.”

The majority of their resources will be deployed in the Eastern Townships and Montérégie, where about 18,000 customers are without power, said Éric Filion, president of Hydro-Québec Distribution.

The hope is that by Monday night, only between 25,000 and 30,000 will still be in the dark. Their power would be restored Tuesday, he said.

Many of the remaining outages are more complicated to fix because they are located in isolated areas or behind homes and require the use of specialized equipment, Filion said.