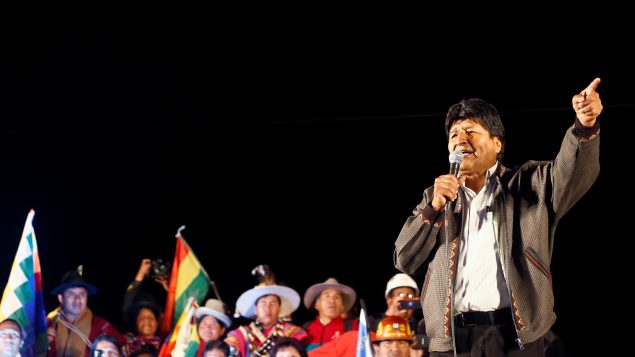 Canada calls for calm in Bolivia

Canada called on Bolivian political and social actors to “exercise restraint and avoid violence and confrontation” Monday, as the country was plunged into a constitutional limbo following the resignation of the country’s first Indigenous president and all of his likely successors.

After weeks of massive protests, President Evo Morales, resigned Sunday after nearly 14 years in power and seemingly every person constitutionally in line for the job quit as well, including his vice president and the Senate leader. The resignations created a power vacuum in the country.

“Canada stands with Bolivia and the democratic will of its people,” Foreign Affairs Minister Chrystia Freeland said in a statement. “We note the resignation of President Morales and will continue support Bolivia during this transition and the new elections.”

Mexican officials announced that they have granted Morales political asylum.

Bolivian opposition lawmaker Jeanine Añez said Monday she plans to become head of the Senate following the resignation of Evo Morales and other senior leaders.

As head of the Senate, Añez could be next in line for the nation’s presidency, given the void in leadership.

Añez said Monday that new presidential elections could soon follow. She spoke after arriving at the legislature in La Paz under heavy guard.

Morales stepped aside only after the military chief, Gen. Williams Kaliman, called for him to quit to allow the restoration of peace and stability following weeks of protests since a disputed election.

Morales earlier in the day had already accepted calls for a new election by an Organization of American States team that found a “heap of observed irregularities” in the Oct. 20 election whose official result showed Morales getting just enough votes to avoid a runoff against a united opposition.

“The results of the OAS mission audit demonstrate serious failings in the conduct and accounting of the Oct. 20, 2019, vote,” Freeland said. “It is clear that the will of the Bolivian people and the democratic process were not respected.”

Canada also calls for the renewal of an independent and impartial Bolivian electoral authority to conduct this process, to be monitored by a robust international observation mission led by the OAS, Freeland added.

Morales was the first member of Bolivia’s indigenous population to become president and he brought unusual stability and economic progress, helping cut poverty and inequality in the impoverished nation, and he remains deeply popular among many Bolivians.

Morales was elected in 2006 and went on to preside over a commodities-fed economic boom in South America’s poorest country. The combative former leader of a coca growers union paved roads, sent Bolivia’s first satellite into space and curbed inflation.

But even many backers eventually grew wary of his reluctance to leave power.