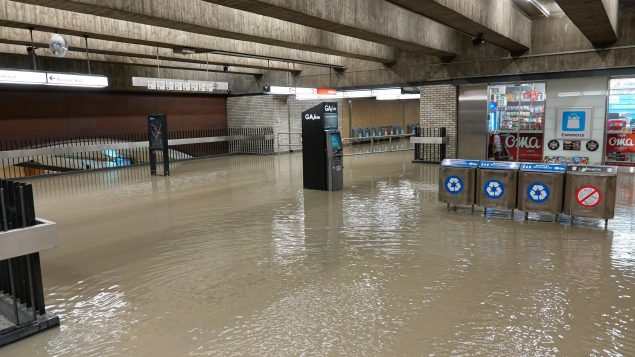 The Square-Victoria–OACI Metro station was flooded with water after a city pipe burst nearby. (Simon-Marc Charron/Radio-Canada)

Tens of thousands of commuters were affected when municipal transit authorities shut down service on the Orange Line between Lionel-Groulx and Berri-UQAM stations as they scrambled to contain a flood of water cascading down the Square-Victoria–OACI station.

Firefighters received a call at 5:45 a.m. about water rushing into a building at the corner of de la Gauchetière Street and Beaver Hall Hill, as well as the Metro station that sits beneath that part of the downtown.

The leak was capped just after 9 a.m., over three hours after the first call came in.

Montreal Mayor Valérie Plante said there are two city water mains in the area, as well as private pipes, which made it difficult to identify exactly where the water was coming from.

Six firefighter teams were called in to pump the water out of the station and the nearby building.

Municipal transit officials said that thanks to quick and professional work of Metro employees and firefighters none of the subway’s the electrical equipment was damaged by the flood.

However, the water main rupture left 207 homes and six businesses without water.