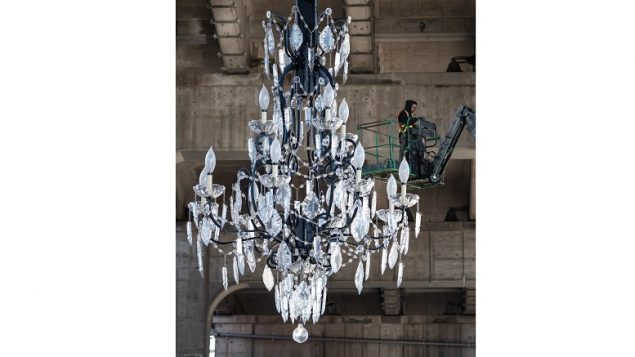 A lift operator works near the chandelier that is about three times his height during installation under the Granville Bridge on Thursday. (Maggie MacPherson/CBC)

Beauty is in the eye of the beholder and when it comes to public art, often the public has a very different opinion than those in politics and the art world who approve and laud the works.

The latest artwork, originally approved by Vancouver council in 2015, was unveiled yesterday, and once again there are those who are raising questions.

A giant chandelier under a bridge will light up, lower and spin at certain times and then raise back under the Granville viaduct. 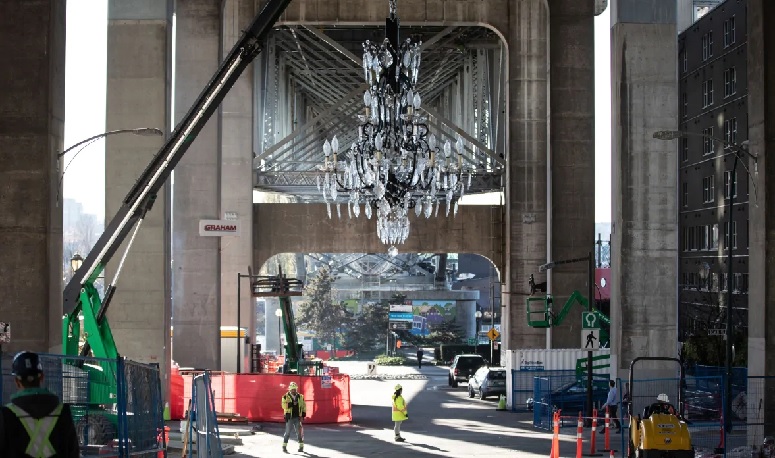 It took more than three years for the piece to be designed and manufactured. The piece is huge at 7.7 metres tall, 4.2 metres wide (Maggie MacPherson/CBC)

At $4.8 million dollars, some say it’s money that could have been spent perhaps on social housing in one of the most expensive cities in Canada.

However, quoted by PostMedia, Mayor Kennedy Stewart gushed that the chandelier was “the most important piece of public art in the history of our city.” 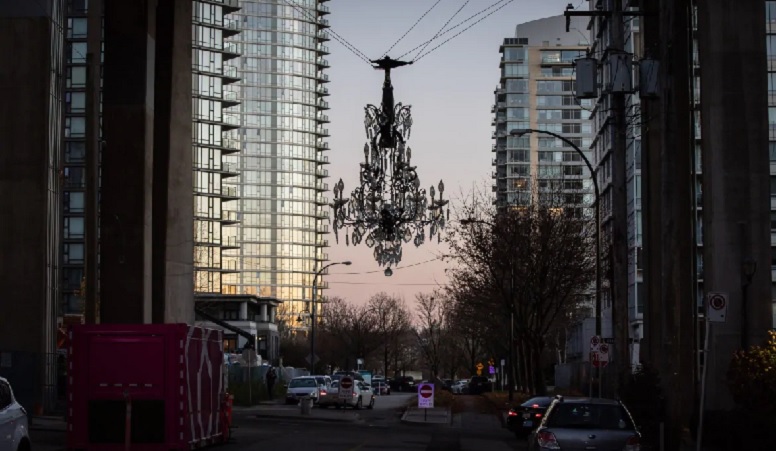 The chandelier, weighing in at a massive 3,401-kg, is made from stainless steel, over 600 polyurethane ‘crystals’ and LED lamps. Twice a day, at noon and 9pm, it will lower, light up, and spin for a few minutes then rise back up under the bridge (Maggie MacPherson-CBC)

Vancouver bylaws require development projects over 100,000 square feet to contribute a portion of the building project budget towards creating a work of public art.

The idea for the “spinning Chandelier came from internationally acclaimed B.C. artist, Rodney Graham, who based it on his earlier film installation called “Torqued Chandelier Release”.

The original cost was estimated at over a million dollars, but as budget ballooned, the developer, of the nearby highrise condo Vancouver House, convinced local politicians to pool the public art funding from their other projects.

Most of the people who dressed warmly for the unveiling expressed a positive viewpoint on the giant chandelier.

One city councillor asked about the potential for vandalism, agreed it might be damaged but added that it would be difficult due to its construction and that it spend most of its time farily high up.  A worker also suggested that it might be subjected to another type of insult, noting a lot of pigeons and seagulls hang out under the bridge and it might be a convenient roost and where the birds tend to relieve themselves.